You scare me, Oscar, said Reeva

Oscar Pistorius yesterday quietly wept as deeply personal text messages, revealing a pattern of jealousy and public spats between him and Reeva Steenkamp, were read out in court. 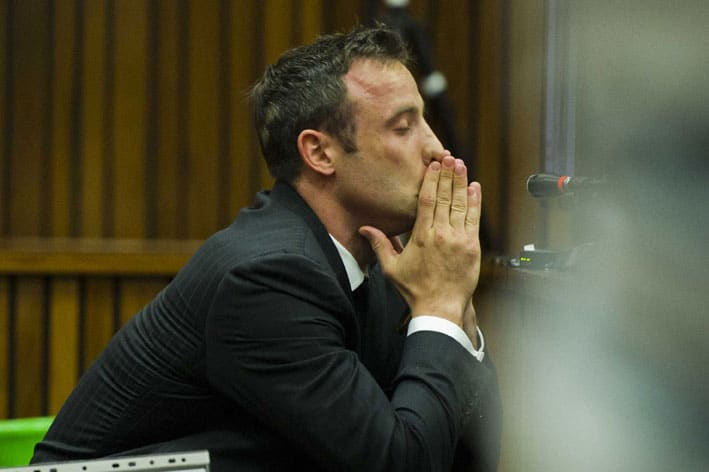 Oscar Pistorius sits in the dock during his murder trial at the North Gauteng High Court in Pretoria, Thursday, 13 March 2014. The Paralympian pleaded not guilty to murder, although he admits killing Reeva Steenkamp by shooting her through a locked bathroom door. He mistook her for a burglar in his house, saying he made a tragic but understandable mistake. The murder trial has been compared to that of the OJ Simpson case in the United States 20 years ago. Picture: Alet Pretorius/Pool

One of the messages from Steenkamp included the chilling phrase “I’m scared of you sometimes and how you snap at me”.

Police cellphone analyst Francois Möller testified that he had unloaded thousands of pages of data from Steenkamp’s iPhone, as well as two iPhones and two other cellphones belonging to Pistorius.

Pistorius, who is on trial for the alleged premeditated murder of Steenkamp in the early hours of Valentine’s Day last year, claimed he had shot her by accident behind a locked toilet door, thinking she was a burglar.

Möller testified he had downloaded more than a thousand WhatsApp messages exchanged between Steenkamp and Pistorius, of which 90% were normal, loving conversations. However, he read a number of messages in which Steenkamp accused Pistorius of double standards, jealousy and making public scenes.

In the first message, sent on January 11 last year, Pistorius appears to be asking Steenkamp, whom he referred to as “Angel”, not to say “anything to anyone”. He referred to Darren Fresco taking the blame for a shot fired in a public restaurant and added that “it can’t afford to get out”, to which Steenkamp replied that she had no idea what he was talking about, but thanked him for telling her.

In another message Steenkamp says there are a lot of things that make them both “feel like sh*t” and tells Pistorius that she is “just very honest” and “not a liar”.

Pistorius responded with a message in which he appeared to accuse Steenkamp of smoking weed (dagga) while she was on Tropica Island. In one message Steenkamp states that she “was not a stripper or a Ho” and said she had innocent fun.

On January 27 last year she sent a long message to Pistorius accusing him of picking on her. She said she understood that he was sick, but felt it was “nasty”, denied flirting with anyone and said she felt sick that he could suggest it and make a scene at a table and force them to leave a function early.

“We’re living a double standard relationship,” she said, accusing Pistorius of being quick to be “cold an offish” when he was unhappy but hearing “every five seconds” about him “dating another chick”.

She also stated that she just wanted to make him happy and not say anything “to rock the boat”, referred to his “tantrums” adding: “I’m scared of you sometimes and how you snap at me.”

She stated that he made her happy “90% of the time” and reminded him that she was the girl who let him in and loved him even when she was “scared out of her mind”. “I’m the girl who fell in love with you,” she poignantly stated.

On hearing this, Pistorius started shaking and appeared to keep back sobs.

In one message Steenkamp appeared to complain that Pistorius told her her accent and voices were annoying and said she was sorry he felt she was hitting on her friend’s husband. “I just want to love and be loved…” she said.

Pistorius replied with a message that he wanted to see Reeva so that they could sort things out.

He said he was upset because she had left him to “talk to another guy”, touched his arm and ignored him.

In another long message on February 8, 2013, Steenkamp wrote about an incident when he criticised her in public. “…I regard myself as a lady and I didn’t feel like one… I can’t be attacked by outsiders for dating you and be attacked by you – the one person I deserve protection from,” she said.