A truck pulled the cyclist off his bicycle, and the cyclist was dragged some distance while the driver was unaware. 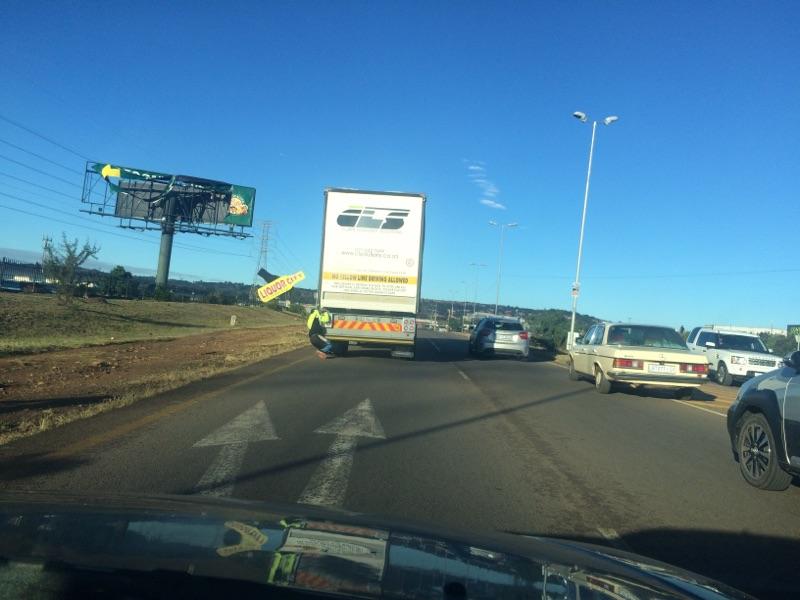 A cyclist fighting for his life on Monday.

A cyclist hooked to the back of a truck had a close shave when he was dragged along Solomon Mahlangu Drive on Monday in Pretoria, Pretoria East Rekord reports.

“Other motorists managed to stop the truck by hooting and driving in front of it,” said witness and Remax realtor Nicol van der Walt.

Van der Walt was driving from Silverlakes when he came across the drama in the east of Pretoria at about 7.35am. He noticed a man hooked to the back of a truck trying to keep his feet from touching the ground as he was being dragged along.

“I think the cyclist on his way to work was hooked by a protruding piece from the truck that latched on to his reflector jacket.”

He said the rod pulled the cyclist off his bicycle, and the cyclist was being dragged of which the driver kept driving unaware.

Van der Walt said the cyclist continued to pull his feet off the ground to avoid being dragged. He held on as other motorists tried to stop the truck driver.

“A motorist eventually caught the attention of the truck bringing it to a halt, and luckily the cyclist was not severely injured but had a few scrapes and bruises.”

“Another motorist luckily picked up his bicycle and could hand it to him.”

Van der Walt said a surprising turn of events was him seeing the cyclist cycle past him when he was parked near a petrol station for fuel.

“When I was about to pull out of the petrol station, here was the same cyclist riding past me again.”

He said the cyclist was in a state of shock after the ordeal.