MTN said it regarded the parody account's reported response to a customer as 'insensitive'. 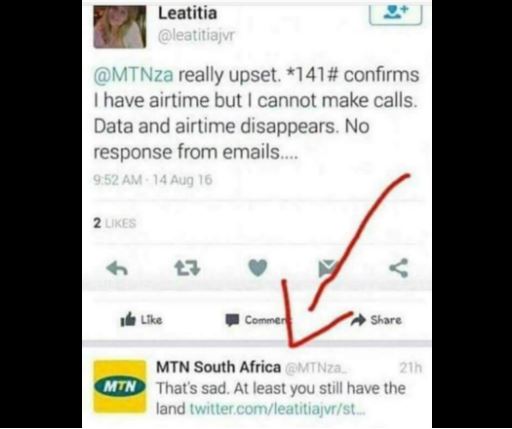 MTN has distanced itself from a tweet that was allegedly sent from an imitation account with its name.

The cellphone network stated that the tweet was sent from a parody account and that it had ensured the account was no longer in operation. This is according to Bridgitte Bhengu, spokesperson for MTN SA, in a statement.

“Twitter has suspended some of these accounts while others became inactive after being discovered. MTN has contacted the customers that have received feedback from these accounts and advised of that fact,” she said.

In addition to that, Bhengu also mentioned that they identified another parody account this week called MTNCare_ZA which has been reported to Twitter for suspension.

In response to the customer’s enquiry, MTN allegedly made a comment saying what had happened to her was sad – however, at least she still had land.

“That’s sad, but at least you have the land,” the account, from which MTN has now distanced itself, tweeted.

Though the tweet was allegedly removed from the account, a screenshot was taken of it and it circulated on social media.