Witnesses say about 20 suspects were involved, and four people were injured. 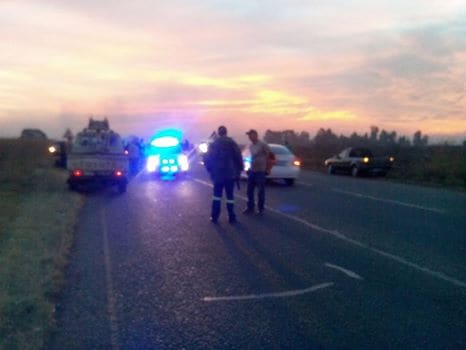 Crime scene
Three cash-in-transit employees and a civilian were rushed to hospital after sustaining injuries during a heist in Springs, on the East Rand.

Traffic on Stoffberg Road, Persida, travelling toward Welgedacht, at 5.15pm on Monday evening came to a standstill when a cash-in-transit heist took place, Springs Advertiser reported.

Although police on the scene were not prepared to offer comment before they finished scrutinising the scene, witnesses believed the suspects shot the tyres of the armoured vehicle, causing it to overturn and roll down the embankment.

They then placed explosives in the back of the van and bombed the vault.

Having taken an undisclosed amount of cash, some of the suspects then approached the cars caught in the traffic.

It was then that they approached Bradley Cloete, 27.

He said he was attempting to reverse and do a U-turn to get away from the men when a white three series BMW stopped in front of him, halting his progress.

Bradley said the car contained four of the heist suspects, all armed.

While three got out of the car, the driver stayed in the vehicle pointing a pistol at him.

One of the other three men, armed with what he thought was an AK-47 (although he could not conclusively confirm this), approached him and opened the door of his bakkie.

He was then told to throw his keys out of the vehicle and to get out.

He reported the other two suspects were banging their guns on the passenger door.

Bradley got out of the vehicle, and the BMW driver asked him to hand over his cellphone, which he did.

The three men then got into his vehicle and drove towards the crime scene about 30 metres away.

When he walked towards the scene of the explosion, he saw two of the cash-in-transit guards on the ground, wounded.

The driver, also injured, was still in the overturned van.

All three were treated on scene by paramedics from various emergency services and transported to a nearby hospital.

A fourth man was shot about 100 metres from the van.

When the suspects fled the scene, they fired three shots, one of which went through the door of the man’s car and hit him in the leg.

He was also treated on scene and transported to hospital.

No fatalities were reported.

Bradley told the Advertiser, before leaving the scene, his company cellphone had already been traced to Daveyton.

He believes the Ekurhuleni Metro Police Department are searching Daveyton for the suspects.