One of the protesters was allegedly kicked in the face by a security guard. 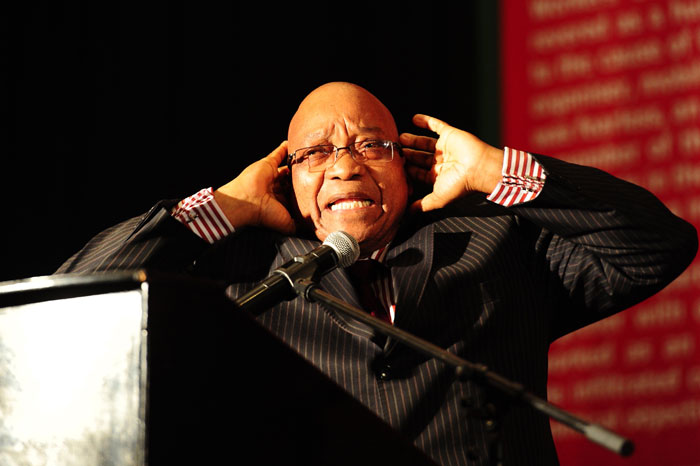 Detailed planning and guerrilla protest tactics enabled a vocal group of opponents to slip past President Jacob Zuma’s security detail and boo him at yesterday’s Youth Day celebrations in Ventersdorp.

“There are certain groups that wanted to disrupt for the sake of disrupting. Many people do not respect Zuma any more,” a community leader said.

Although police and ANC security personnel made strenuous efforts to filter out those who might cause a disruption, a group of people from political parties and community groups in Ventersdorp, as well as disgruntled ANC members, managed to get inside the giant tents at Tshing Stadium.

As the president began speaking, they started chanting “Zuma must fall!”

Zuma stopped speaking as security people surrounded the protesters and escorted them outside, where they continued to sing in protest.

A protester said: “One of us was kicked in the face by a security guard and injured. We were dragged out of the event. We threw stones at one of the police and we don’t know whether he is injured or not. They used pepper spray and we have been running away from the police. We have gone into hiding because the police are looking for us.”

The Citizen was told that people from the informal settlement in Ward 24 of Tshing had gone into the stadium as “ordinary people”.

Zuma addressed the 2 000-strong crowd saying: “Even if an evil spirit enters you, remember that those who died on June 16 fought so that we could be free … Don’t join people who speak negatively about South Africa because, if you are positive, everything will be positive.”

He received a standing ovation.