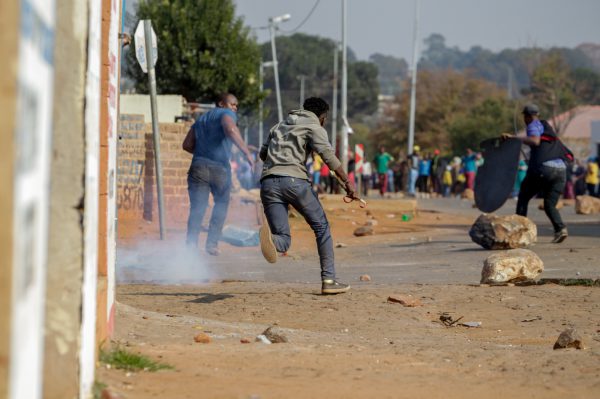 Residents flee as police deploy tear-gas during during a protest in Finetown, Johannesburg. Residents burnt tyres, blocked roads and threw rocks at police during protests today against a lack of formal housing in the area. 10 May 2017. Picture: Yeshiel Panchia

The violent community protests that have gripped different parts of the country in the last couple of months are nothing compared to what is likely going to happen in the coming months, the Institute for Security Studies (ISS) warned yesterday.

Senior researcher at the ISS Johan Burger says the violent protests were also an indication of how the state was losing its grip on governing the country.

“As a result, the state’s authority is becoming increasingly weak and that vacuum has now been filled by the protests that we have been witnessing. The country is on a slippery road to chaos… it appears that we are well on our way to having our own Arab Spring because the signs are already there.”

Burger says the high levels of political and economic instability and the absence of government are not helping the situation.

He said many people in the country were clinging to hope that the ANC would elect a new leadership that will be largely accepted by many.

“But with the ANC’s elective conference taking place only in December, a lot can still happen. In fact, we are yet to see the worst violent protests.

“The only way to stop the violence is to re-establish stability, and something will have to be said at the ANC’s policy conference starting on Friday (tomorrow).”

Burger said even the police have been placed in an impossible situation in having to deal with the violent protests, to a point where police-community relations suffer as the men and women in blue are expected to restore law and order.

“The fact that the temperature of violence is rising rapidly, whether it be protest over service delivery or crimes, such as murder and the abuse of women and children, should have everyone worried. This … will at some stage boil over if left unchecked.”

Early this week, Metrorail protection services officer Joseph Koena was standing on the platform when he was grabbed by a group of protesters, who allegedly stoned him to death.

Train services have been suspended indefinitely between Vereeniging and Johannesburg. – stevent@citizen.co.za