Chaka was removed from the caring couple who live among rescued wild animals, as they did not have a permit. 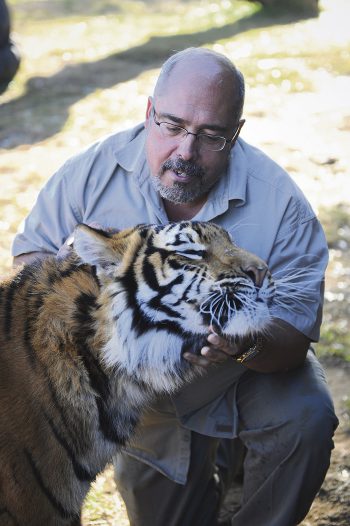 Rassie Erasmus plays with one of his pet tigers, 10 July 2017, at his plot in Meyerton. A young lion owned by the couple, named Chaka, was taken away from them on the 13th of June in a legal tussle over permit requirements. The couple is fighting for Chaka's return. Picture: Michel Bega

A Meyerton couple, who have turned their home into a wild animal sanctuary, are pleading with government to give back a lion cub which they claim to have rescued from being killed for muti.

Jenny Erasmus and her husband, Rassie, bought Chaka from an informal trader in November last year.

The seven-month-old lion has been held in quarantine at the Johannesburg Zoo for the past month after the agriculture and forestry department “rescued” him from the property. This, they said, was because Erasmus did not have a permit.

The couple claim they rescue wild animals because they often get sold into the muti market or are exposed to abuse.

They tried for months to obtain a permit for Chaka, but ran from pillar to post with the department.

The zoo’s spokesperson, Jenny Moodley, confirmed the lion was in their care, but could not comment further.

Dr Arnold Kanengoni, the vet responsible for Chaka at the zoo, was not available for comment.

Jenny Erasmus claimed the lion was taken from her home illegally.

“They came to us with a search and seizure warrant. By law they have to have an affidavit of the complainants,” she said.

Erasmus said she was devastated when Chaka was taken because she had grown so attached to him that he slept in her bedroom.

“I said to [them] please, don’t take my lion, we will get the permits. He is in beautiful condition and if you take him away he is going to pine to death.”

But her pleas were to no avail as the lion was tranquillised and taken to the zoo. The couple’s 8ha sanctuary is home to several wild animals, including two tigers.

The couple said they were in the process of having their land legally declared a zoo. – simnikiweh@citizen.co.za

WATCH: SA lion glares at a nature guide - with only mesh between them
2 months ago
2 months ago

WATCH: SA lion glares at a nature guide - with only mesh between them
2 months ago
2 months ago