One of the company's drivers succumbed to his injuries yesterday after his car was set alight in Pretoria recently. 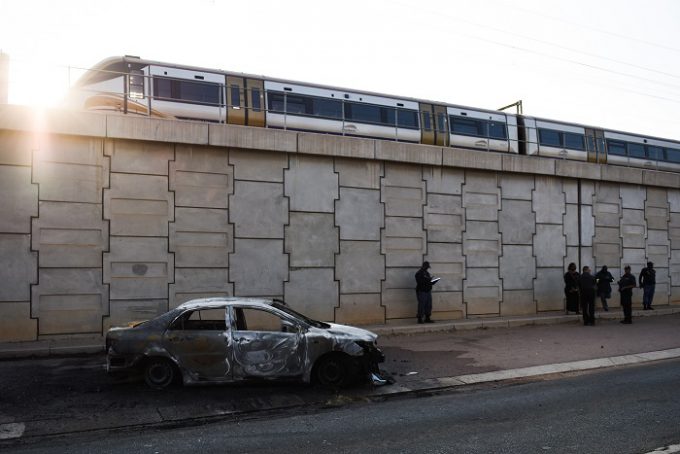 Police officers stand near the remains of a burnt out uber car on University road near the University of Pretoria, by standers claim the car was burnt by metered taxi drivers, 4 July 2017, Pretoria. Picture: Jacques Nelles

Uber Africa is pleading with the police and transport departments to “commit” to solving the issue of intimidation against its drivers, amid tensions with metered taxi drivers.

Uber’s statement came after one of its drivers succumbed to his injuries yesterday after his car was set alight in Pretoria recently.

He died after a long battle in hospital. News of his death coincided with an incident at the Gautrain Station in Sandton, where two people were left shaken after being pulled out of an Uber taxi.

“We can only ask that you contact the department of transport and minister of police to ask for their commitment to solve these issues, as they are the only ones who can move this forward,” Uber’s Samantha Allenberg told the media.

After a request by Uber, a meeting was held yesterday with the ride-sharing service and top police management.

Police spokesperson Vuyo Mhaga said issues of intimidation and damage to property were discussed. More clarity on the resolutions would be made at a later stage as discussions continue, he added.

Police Minister Fikile Mbalula recently called for metered taxi drivers to be more innovative and work with Uber drivers to end the violence.

The driver who died, whose family requested that he not be named, was attacked on June 10 by a small group of unknown individuals and his car was set alight while he was in the vehicle.

Allenberg said Uber had been in touch with his family since the incident. While no arrests have been made, Uber also had a team of former law enforcement officials who are working with police, she said.

Meanwhile, one of the victims of the Gautrain attack told the Sandton Chronicle about her ordeal. Speaking anonymously out of fear for her safety, she identified the intimidators as metered taxi drivers.

“We ordered an Uber and phoned the driver to tell him to pick us up across the road. As we were crossing the road, we saw a taxi driver run towards the Uber.

We got scared and jumped into the Uber,” said the woman.

The vehicle was then surrounded by metered taxi drivers, who were banging on the car while shouting obscenities.

“The next moment we were pulled out of the Uber,” she said.