The children were also treated to a once-in-a-lifetime experience of flying in an aircraft with Tshwane mayor Solly Msimanga. 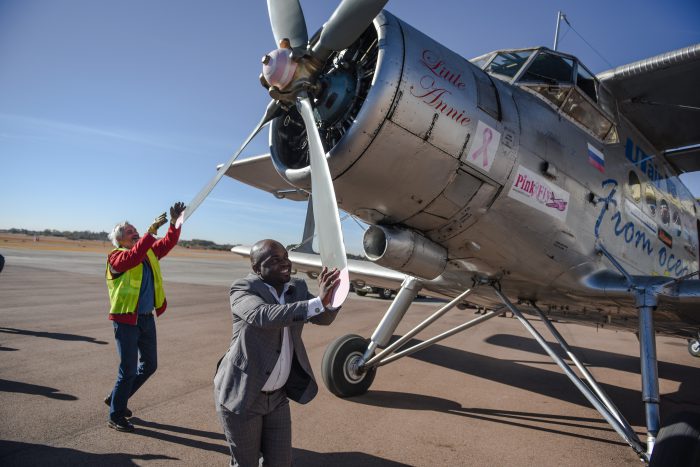 Executive Mayor of Tshwane Solly Msimanga attempts to turn the propeller of an aircraft prior to his flight with a group of orphaned children during the launch of a new project to build the Little Swallow Aviation Play Park where Pretoria children will be exposed to the aviation industry, 17 July 2017, Wonderboom Airport, Pretoria. Picture: Jacques Nelles

As part of the City of Tshwane’s 67 Minutes for Madiba programme, orphans from the Bramley Children’s Home and underprivileged children were hosted at a “Christmas in July” party at the Wonderboom National Airport.

They were also the first to play at the brand new Wonderboom Aviation Play Park. This park is a first of its kind in Africa.

The children were also treated to a once-in-a-lifetime experience of flying in an aircraft with Tshwane mayor Solly Msimanga, before they were surprised with gift hampers from Santa Claus.

The “Little Solly”, a decommissioned aircraft, was also unveiled at the play park where children could satisfy their curiosity of what it looks like inside a real aircraft.

The “Little Solly” character colouring book, which describes the journeys of a little aeroplane and his friends, as well as the ambulance and fire brigade, was also launched.

The storyline is about aviation and it includes tourism attractions in the area, the history of the airport, aviation themes and words.

Msimanga said the play park would be used to generate an income for the airport.