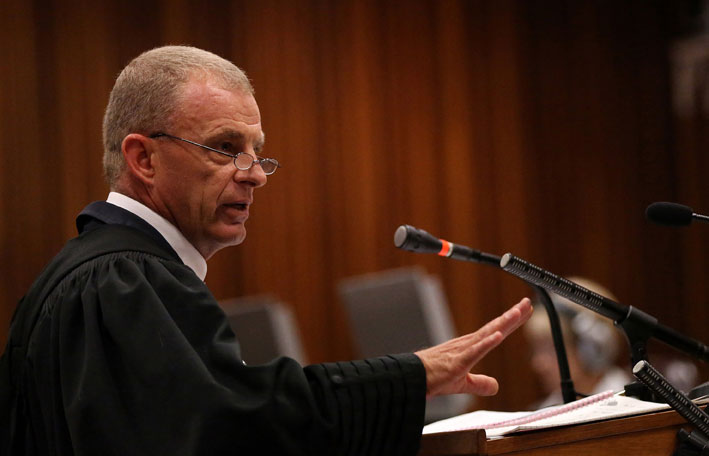 State prosecutor Gerrie Nel cross-examines paralympic sprinter Oscar Pistorius during his murder trial at the North Gauteng High Court in Pretoria on Wednesday, 9 April 2014. Pistorius sobbed in the witness stand on Tuesday as he described how, gripped by fear, he shot dead his girlfriend through a locked toilet door thinking she was an intruder. Picture: Siphiwe Sibeko/Reuters/Pool

After showing a video of a shooting exercise in which Pistorius fired shots at a watermelon and is heard saying “ït’s a lot softer than brains but #$%* it’s like a zombie stopper”, Nel declared: “We can see the effect it had on a watermelon. It exploded. The same happened to Reeva’s head. It exploded. It had the same effect, the bullet that went into her head.”

Pistorius’ advocate Barry Roux objected to the comparison, saying it was unfair as there was no evidence to back up the suggestion.

Earlier the court had been shocked into silence when Nel showed a picture of Steenkamp with parts of her head blown off.

“I picked up Reeva. My hand touched her head. I remember. I was there. I don’t have to look at a picture of what torments me,” Pistorius said tearfully.

Pistorius denied that he had fired shots at the watermelon to test what effect it would have on a person’s head.

A photo of Steenkamp’s horrible head wound remained on the screens for several minutes before Judge Thokozile Masipa said she agreed with defence advocate Roux that it was unfair and asked that the photo be removed. Reeva’s mother, June, sat with her head bowed and did not look at the screens displaying the shocking picture.

Nel also grilled Pistorius about differences between his statement in the bail hearing and his evidence in court about moving the fans.

Pistorius insisted that his version had never changed, but said his legal team might have interpreted some of the things he said differently and did not include some aspects. Pistorius said they had “reworked” his evidence but quickly retracted the statement, saying he had merely used the wrong word. Nel accused Pistorius of lying and arguing.

He also grilled him at length about his statement that Steenkamp’s death had been an accident.

Pistorius repeatedly said he did not have the intention to shoot anyone.

Nel asked if Pistorius had shot at the “intruders”, to which he replied that he had believed someone was coming out to attack him and did not think but just discharged his firearm. “I didn’t intend to shoot at anyone. I shot out of fear. …My firearm was in my possession. I had my finger on the trigger. It was an accident that happened.”