Everything you need to know about the ‘Dagga Couple’

Warriors in joint war: She has a fine art degree, he was an air traffic controller. 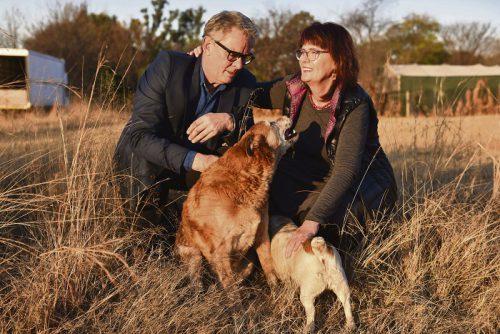 Julian Stobbs and Myrtle Clarke, known as The Dagga Couple pose for a picture at their home after an interview with the Citizen, 19 July 2017. Picture: Tracy Lee Stark

Myrtle Clarke and Julian Stobbs are the “Dagga Couple”, the name the media coined for them a few years ago.

But if you were to omit the word ‘dagga’ from that moniker you get an ordinary pair, but one with fire in their bellies – and not just over the legalisation of cannabis in South Africa – but injustices across all spectrums.

Nobody asks them about themselves, is the consensus when their backgrounds come up. All they’re asked about is dope.

“So thank you for asking,” says Stobbs. “I grew up in nine schools in 11 years. My father was a hotel manager and we went everywhere his job went. I left England as soon as I possibly could.

“It never really agreed with me.”

He joined the navy, went around the world twice, and became an air traffic controller.

“I then walked away from that and packed a bag and a guitar I couldn’t play yet and went and hung out on a beach in Goa in 1987 for five years and dropped off the edge of the Earth.

Stobbs’ love for South Africa is apparent and so is his contempt for colonialism. He has permanent residency here.

He says: “This place still gives me the greatest of hope that this is a new start, and there is a new Constitution and this is just a glitch in the machine for the last eight years … I think it will come right because we still have lots of minerals and resources and when you leave Johannesburg and travel 50km, you’re in the middle of nowhere and it’s great.”

Clarke had a conservative upbringing, her father being a Methodist minister. She packs quite a CV with stints from fine art to being a chef.

“I grew up in kwaZulu-Natal and, all my life, all I wanted to do is live in Joburg. As soon as I finished school I moved to Johannesburg and went to Wits and did a fine art degree.”

She taught at a school before going to England. When she met Stobbs she was almost 40. She eventually moved onto the farm in Lanseria where they live now.

The couple work in the film industry and a few years ago while working on Big Brother they were arrested after dagga was found on them.

Since then they have been fighting the law prohibiting and classifying the plant as a drug. In nine days they will take this gripe to the High Court in Pretoria, where the Trial of the Plant will test the constitutionality of the matter.

Then the case may land in the Supreme Court of Appeal before going to the Constitutional Court with the aim of changing the law.

“It’s not if the law changes, it’s when,” says Clarke.

Their fight is also for youths arrested for cannabis who get a criminal record for 10 years, which hinders their lives greatly. Stobbs says one reason he chose this journey was because he is English.

“I get the race card pulled on me now and then for being colonial. But I am doing it because of those sick and twisted people who came here in the first place. They make me mad and it’s payback time for colonialism. It was colonialists who put this (prohibition) together in the first place. It’s a man-made structure and it’s the English who did it in the 1850s.

“My main passion is the history of white people meddling in the business of black people, coloured people and Indian people.”

He cites why it was prohibited in KwaZulu-Natal in the 1800s.

“A white boy saw a stoned Hindu chopping down cane. Now he could have done that for 18 hours straight. He felt the pain, the ganja helped him, but they wouldn’t let him [use it].”

After the trial and once their goal is realised, their attention will go back to their farm, says Clarke.

“We love to garden. I paint and I love to cook.”

They will do what they enjoy doing when their time is not consumed by the fight to free the herb, adds Stobbs.