This included creating thousands of fake posters, forging documents and leaking false information to the press. 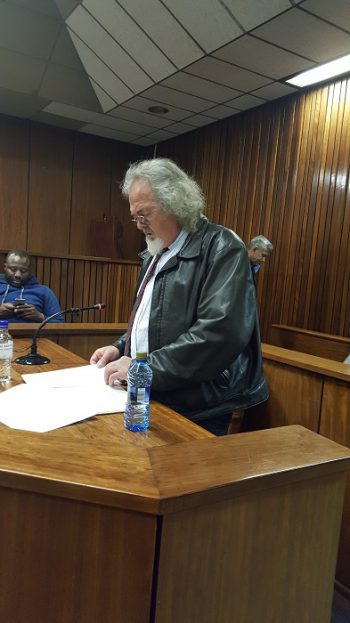 A former security policeman has told the inquest into the death of anti-apartheid activist Ahmed Timol that torture and elaborate cover-ups were standard procedure for apartheid-government security police.

Paul Erasmus, who was a member of the security branch for 17 years, but still at school when Timol died in 1971, testified in detail in the Pretoria High Court yesterday about his involvement in the police’s disinformation campaign as part of a covert war against liberation movements.

This included creating thousands of fake posters, forging documents, leaking false information to the press and overseas leaders such as the British prime minister and bugging the phones of people such as Advocate George Bizos.

He said torturing suspects – which usually started with sleep deprivation and included electrical shocks to induce a state of “total fear” – was standard procedure, as was covering up the police’s role in the deaths and torture of detainees.

He was involved in an operation to make the death of trade union organiser Dr Neil Aggett appear to be a suicide.

Aggett died while in police detention in 1982 after being arrested by the security police.

According to Erasmus, he was told the police could not afford “another Timol or Biko situation” and he was told to gain evidence that Aggett was a “born suicide case”.

He was arrested when he broke into the house of Aggett’s parents and was then made the “fall guy” in a prearranged criminal trial.

He said he had attended many “mock” trials in which witnesses were prepared for Aggett’s inquest.

Retired state advocate Ernie Matthis testified that he was working on a prosecution at John Vorster Square in October 1971 when he happened to look out of the window and saw a man falling horizontally past the window and landing on the ground with his arm over his head.

He looked up, but could not see an open window or anyone on the roof.

An inquest found in 1972 that Timol had committed suicide.

The police claimed he was guided by an SACP document advising cadres to commit suicide rather than give up their comrades.

A top SACP leader in London, Stephanie Kemp, however, testified that she believed the security police had faked the document, as communism was a “celebration of life” and operatives were taught to be heroic and hold out as long as possible to allow others to escape.

Kemp testified that she was tortured by the security police in the 1960s, with a policeman hitting her on both sides of her head and bashing her head against the floor so that she lost consciousness.

Kemp – who said she had taken part in numerous acts of sabotage – later successfully sued the police for damages, but spent two years in prison for being a member of a banned organisation.

She eventually fled South Africa because her every movement was watched.
– ilsedl@citizen.co.za