The only reasonable inference was that Reeva Steenkamp had run away screaming after an argument with Oscar Pistorius before he shot her, the prosecution has stated. 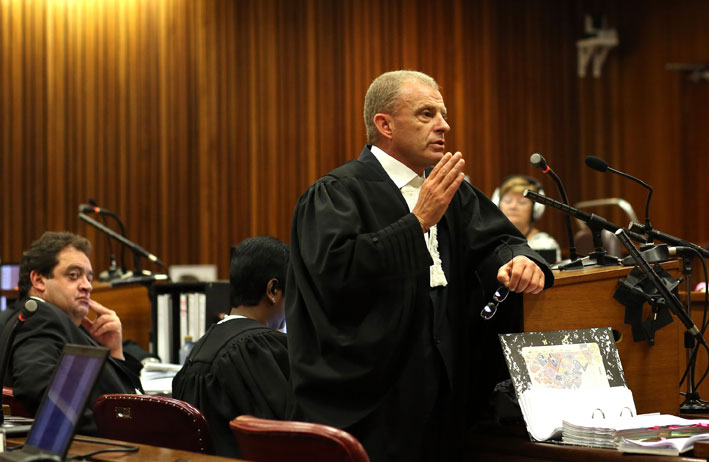 Prosecutor Gerrie Nel yesterday tore into murder-accused Pistorius’s version that he had “accidentally” shot Steenkamp, thinking she was an intruder about to attack him.

He confronted Pistorius about his version that he got up in the middle of the night to move the fans, did not see Reeva getting up and fired shots into the locked

bathroom because he was terrified and believed they were about to be attacked.

Nel said the position of the fans, the curtains and the duvet on photos of the crime scene all pointed to Pistorius’s version being a lie.

He insisted his back was to the bed when he moved the fans and he had never seen Reeva getting out of bed – although he saw the duvet was over the lower part of her legs and her jeans were on the floor.

Pistorius said the police must have moved around the fans, curtain, duvet and other objects on the scene, but admitted they were not aware of his version at the time.

Nel accused Pistorius of lying about his version that he had moved the fan.

“I will build my argument to say when you got up you had an argument so she ran away screaming.

“Circumstantial evidence is evidence. We have witnesses who heard a woman screaming. We cannot lead eyewitness evidence because the one witness we wanted to call is dead.

“…The only reasonable inference from the evidence is that there was an argument.

“… The only reasonable inference is that the deceased ran screaming from there and that the door was never closed,” Nel said.

Pistorius replied: “That is not true, My Lady”.

He insisted he was telling the truth and photos proved that objects had been moved at the scene.

Nel replied: “You can keep on trying Mr Pistorius. It is not working…

“Your version is so improbably that nobody would ever think it is reasonably possibly true,”

Nel also grilled Pistorius about the number of shots he fired.

Pistorius repeatedly said his advocate (Roux) had misunderstood him.

Nel repeatedly accused Pistorius of adapting his version, lying, and not being prepared to take responsibility for his actions and arguing the case instead of answering questions.