Paralympian Oscar Pistorius yesterday admitted he never bothered to make sure where Reeva Steenkamp was before firing the four shots that cost her her life. 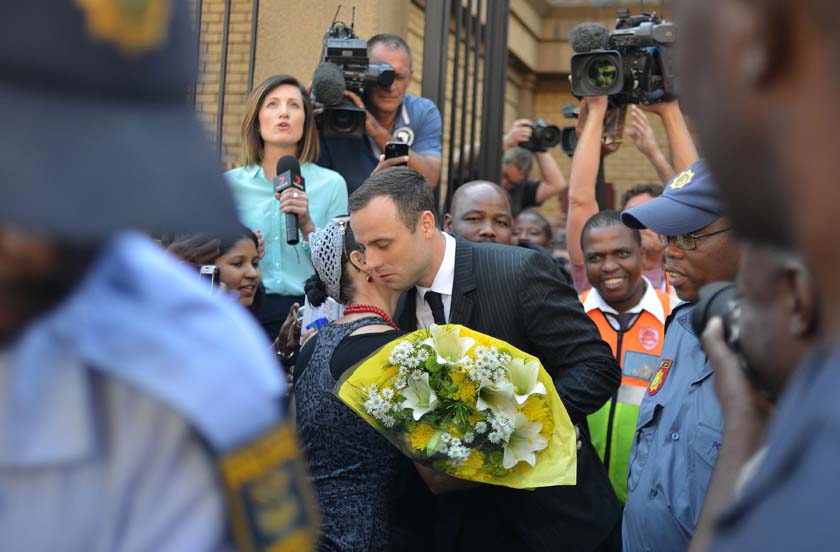 Pistorius stuck to his version that he had fired the shots at a closed toilet door out of fear because he believed he was about to be attacked, but battled to explain why he thought an intruder would enter his house, go to the toilet and close the door.

“Your perception is impossible Mr Pistorius. You never perceived someone coming out to attack you.

“…On your version and on the state’s version, she was standing behind the door facing you while you were shouting. If she was scared she would not have been there.

“…She was talking to you. She was three meters away from you… She was standing right in front of the bathroom door talking to you when you shot her.

“That is not true my lady,” Pistorius replied.

Asked why he, as a double amputee who felt vulnerable, would go towards the danger, Pistorius said he was the type of person who, instead of cowering and running away, wanted to put himself between Reeva and the perceived danger.

He said he was “100% sure” intruders had gained entry into the bathroom after hearing the window sliding open, and did not need to confirm it with Reeva.

“I didn’t wait for a response and I didn’t hear a response. My whole being was fixated on that person I heard in the bathroom,” he said.

Pistorius said he did not find it strange that Reeva did not respond because she had previously been unable to speak to anyone after hiding in a cupboard during a robbery.

He conceded they could have escaped the danger in another way, but said everything happened in a split second and he “did not have time to think”.

Grilled about the position of Reeva’s jeans, the duvet and fans in the bedroom Pistorius at one stage became emotional, saying it was difficult for him to remember everything.

“That’s the night I lost the person I cared about. I don’t know why people don’t understand that,” he wailed.

Pistorius’ first week in the witness box was not an easy one.

Day 1:
A tearful Pistorius apologises to Steenkamp’s family for the emptiness “the tragedy” had caused them. He says he’s on anti-depressants and cannot sleep because of nightmares and the smell of blood. He describes his childhood and sporting career and says he has been the victim of crime many times. The court has to adjourn early when he pleads exhaustion.

Day 2:
An embarrassed Pistorius, dressed in a T-shirt and shorts, has to pose in front of the reconstructed bathroom door after removing his prosthesis. He describes spending a quiet night at home with Steenkamp, getting up, hearing a noise in the bathroom and firing shots into the door fearing an attack by an intruder. The court adjourns early after he broke down and starts sobbing inconsolably while testifying about finding Steenkamp body in the toilet.

Day 3:
A much calmer Pistorius testifies how he sat crying with Steenkamp’s head on his shoulder, how he carried her downstairs and tried to stop the bleeding before she died in his arms. He admits an incident when he fired a shot at a watermelon saying it was “a lot softer than brains but … it’s like a zombie stopper”. He starts sobbing when prosecutor Gerrie Nel confronts him with a gruesome close-up photo of Steenkamp’s head injury, urging him to “take responsibility for what he did”.

Day 4:
Nel takes Pistorius to task for apologising to Steenkamp’s family in court and accuses him of being selfish and only caring about what was important to himself. Pistorius is at times tearful but remains calm when Nel calls him a liar and accuses him of refusing to take responsibility for anything – even firing a shot in a busy restaurant with children at the text table.

Day 5:
Pistorius, during his third day in cross-examination, sticks to his version that he thought Steenkamp was an intruder and that he had approached the bathroom with his firearm because he wanted to put himself between her and the perceived danger. The court has to adjourn for a while when he becomes tearful and says he doesn’t know why people cannot understand that he also lost someone who was important to him.