He was not sure who should be blamed for the fact that he shot dead Reeva Steenkamp, Oscar Pistorius told the North Gauteng High Court yesterday. 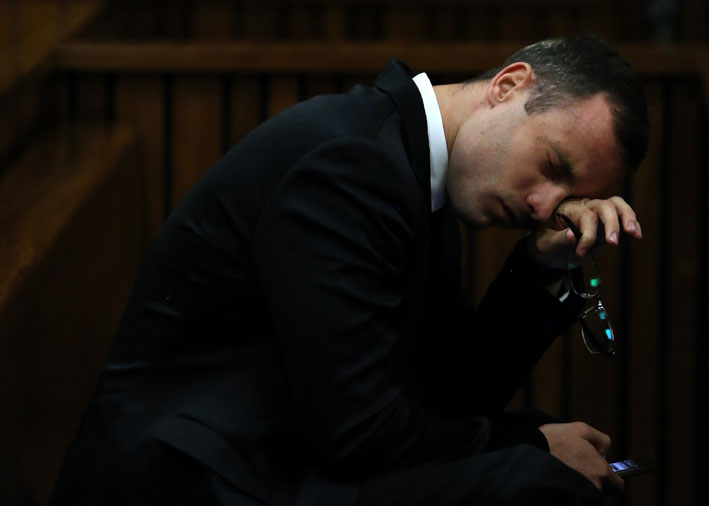 FILE PICTURE: Oscar Pistorius wipes his face during his murder trial at the high court in Pretoria, Monday, 7 April 2014. Pistorius is charged with murder for the shooting death of his girlfriend Reeva Steenkamp on Valentines Day in 2013. Picture: Themba Hadebe/AP/Pool

“Who should be blamed for the fact that you shot her?” prosecutor Gerrie Nel asked Pistorius, to which he replied: “I don’t know, My Lady. I was scared. I believed there was a threat on my life.”

When Nel wanted to know if Reeva could be blamed for not telling Pistorius she was going to the toilet or if “the government” could be blamed, Pistorius replied he believed there was a threat.

Nel also wanted to know who should be blamed for the black talon rounds “that ripped through Reeva’s body” and asked Pistorius why he had such ammunition.

Pistorius said it was because it was the ammunition used for his type of firearm. A State pathologist earlier testified black talon ammunition mushroomed on impact to cause maximum damage to human tissue.

Nel told Pistorius his version that he had fired the shots because he was scared, without meaning to hit anyone, was not only untruthful but so improbable it could not be possibly true.

“I do not agree, My Lady,” Pistorius replied.

Nel said the court would, on the objective facts and circumstantial evidence, find Reeva had eaten within two hours before she was shot, that she was awake and that a neighbour had heard an
argument.

He said the court would find Reeva was talking to Pistorius when he fired the four shots through the door, that he knew she was behind the door and that he had armed himself with the sole purpose of killing her.