The sixth week of Oscar Pistorius's murder trial finally saw him concluding his evidence, with the third witness for the defence, forensic geologist Roger Dixon, taking the stand. 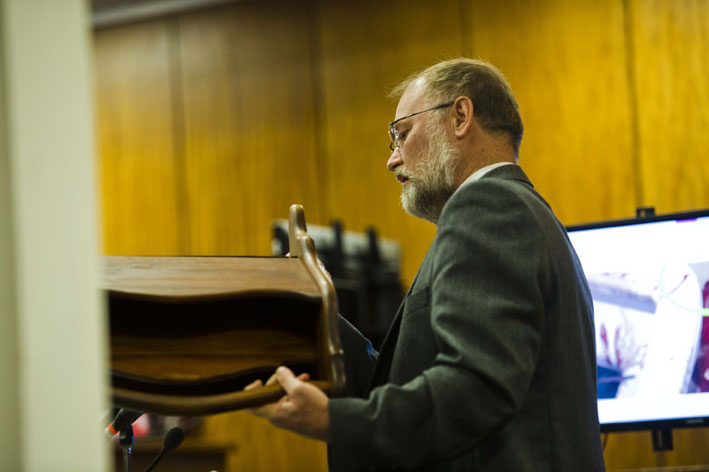 Forensic geologist Roger Dixon holds a magazine rack during cross-examination at the murder trial of paralympian Oscar Pistorius on Thursday, 17 April 2014. The athlete's murder trial resumed in the North Gauteng High Court in Pretoria on Thursday – the last day before a two-week postponement. Picture: Alet Pretorius/Media24/Pool

Prosecutor Gerrie Nel starts by telling Pistorius his version is so improbable it cannot be reasonably possibly true. Pistorius cannot explain the State pathologists’s evidence that Reeva ate two hours before her death, but says it is improbable.

He says he fired the shots without thinking, prompting Nel to accuse him of changing his defence from putative self defence to involuntary action.

Pistorius admits he never warned the intruder he was armed or fired a warning shot.

He says he went to search for Steenkamp after firing the shots with the gun still in his hand and only dropped it when he tried to open the door. He realised she was in the toilet when he could not find her in the room, but cannot explain why he did not check to see if she had left the room.

Nel finally concludes cross-examining Pistorius, putting it to him that the court will find he and Steenkamp had an argument and that she fled screaming from him and hid in the toilet.

Pistorius testifies in re-examination that he was terrified and fired the four shots involuntary before he could think, not meaning to hit anyone.

The third witness for the defence, forensic geologist Roger Dixon, testifies that a police footprint on top of the bullet holes in the door was “most unprofessional”.

He says the bruises on Steenkamp’s back could not have been caused by a bullet ricochet, but was caused by her falling on a magazine rack.

He found fibres of Pistorius’s sock still embedded in the door’s varnish and corresponding varnish on the sock on the athlete’s prosthetic foot, supporting Pistorius’s version that he was on his prosthetic legs when he tried to kick down the door.

Judge Thokozile Masipa grants the State’s request to postpone the trial to May 5.

Nel attacks Dixon’s expertise and accuses him of being irresponsible by testifying about areas in which he was not an expert. Dixon admits he is not an expert on ballistics, wound ballistics, sound, light, pathology or blood spatter. He is also not affiliated to any forensic body. He admits he never compiled a report about his conclusions.

Judge Masipa warns people in the overflow court that it is an extension of the main court and “not an entertainment place or picnic nest”.

Nel concludes his cross-examination of Dixon, who admits frogs can be heard in the background in recordings of the cricket bat bashing a wooden door and a shot. Nel puts it to him that the cricket bat sounds were amplified. Dixon says he only used the naked eye to test how dark it was in Pistorius’s bedroom. He did not do tests with the balcony light on because he was unaware of Pistorius’s evidence that the light was on, or the State’s case that the curtains were open that night.

Nel says his version contradicts Pistorius’s evidence that the magazine rack was not there.

Dixon admits photos he took of a person in Oscar’s bathroom was of someone on his knees while Oscar would have been 20cm higher on his stumps. Dixon says he “overlooked” it.

He at one stage testifies with Pistorius’s prosthetic leg in his hands. He is not aware that a piece of the foot was removed for tests. He did not test any other wooden frames in the house because he was not aware that the leg might have been used to kick them.

He says in re-examination that when he hit a door with the cricket bat at a shooting range the range master asked if they had already started shooting.