The leopard ordered himself an easy drive-through meal from the wild dogs. 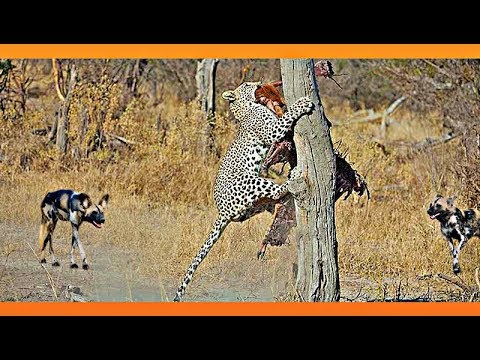 Field guide Patrick Mziyako was taking his guests for a ride when he captured this footage of wild dogs in Kruger National Park, at Kwaggaspan Waterhole near Skukuza, in Mpumalanga, Lowvelder reports.

Mziyako says: “I was on a morning game drive from Jock Safari Lodge when I saw a pack of nine wild dogs lying down. As I approached the pack, four of them stood up and began walking around. They spotted a small herd of impala 100 metres away to the western side of the road and one wild dog started stalking them.

“Soon, the rest joined in with the chase. They singled out one impala from the herd and hurried it towards the waterhole, which is nice and open. Myself and my other colleague who was following me, watched as two dogs running on the road led us straight to the kill.”

While watching all of the dogs feed on the impala, a male leopard came out from nowhere and grabbed the half-eaten impala and raced straight up into the leadwood tree close to the road.

“Wow, what a sighting! I got very excited because it is not easy to witness such a drama in Kruger. The wild dogs tried to fight the leopard off, but it was too late. They soon left the scene after trying to stare their food out of the tree. This is a very rare sighting, ” said Mziyako

“The last time I got to witness this was seven years ago at Berg en Dal camp. I always recommend going out on drive early in the morning, because you can witness things like this without being interrupted by any other cars.”