She and her husband were attacked by suspects posing as potential buyers. 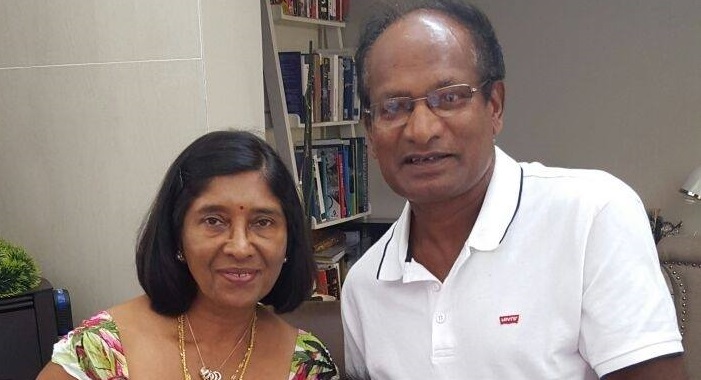 The deceased, Gona Pilla with her husband, Loga.

Former principal of Southlands Secondary School, Gona Pillay, was found stabbed to death at her home in Silverglen Crescent, KwaZulu-Natal.

This after Blue Security personnel received a panic alert from the Pillay’s property, at about 7.15pm, on Tuesday, Rising Sun Chatsworth reported.

According to reports, Pillay and her husband, Loga, were accosted by armed men who posed as potential buyers for the elderly couple’s property, which they recently put up for sale.

Pillay was stabbed repeatedly in the back and the neck, and died in the bathroom. Her husband was also stabbed, but managed to crawl to a panic button and call for help.

She was pronounced dead at the scene by paramedics while her husband, who is also a former teacher, was stabilised and transported to hospital by emergency services.

At present, he is in a critical condition. The suspects fled with the couple’s E230 Mercedes (silver grey) and other household items.

Mathios advised homeowners to be vigilant, and to guard against this new modus operandi to avoid falling prey to criminal gangs.

“Unfortunately, the gang had calculatedly planned the crime, done its homework and obtained the name of a legitimate estate agent that they had used to deceive the unsuspecting couple. It is never a good idea to invite strangers into your home and even if they come with a legitimate sounding reason, first take the time to check out whether their story is legitimate, before opening the front door,” he said.

Mathios added: “Contact the estate agent and find out what’s going on. If your home is for sale and a potential buyer comes to the door wanting to view, only allow them in if they come with a known estate agent and by prior appointment. Most estate agents worth their salt will also have done some basic homework in checking out buyers to make sure they are legitimately interested in purchasing a property before they show them properties on their books.”