Hundreds of kids between the ages of 12 and 14 made their way out of the Comaro Crossing basement after the party. 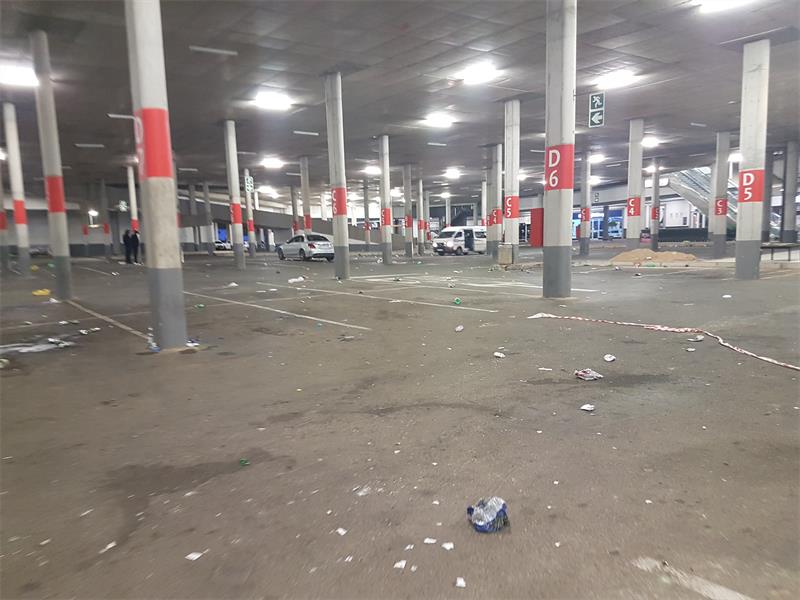 DISASTER: The state of the parking lot after the party.

A poster was circulated prior to the event with headlining acts from well-known names in music such as Anatii and J Molley, to name a few.

It is alleged the party began around 6pm, and children and teenagers heard about it, and made their way to Comaro Crossing from the Glen and various other parts of the area.

There was a stage set up with lights and the works, and there was also what appeared to be a VIP area next to the stage, which was underground. 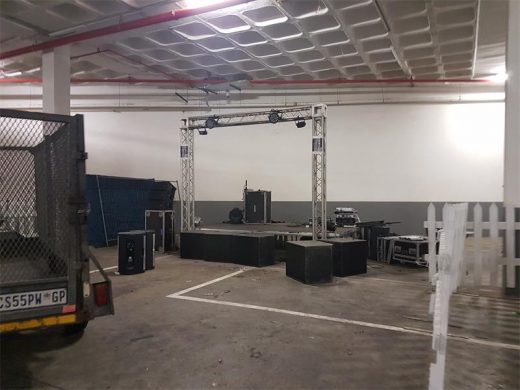 STAGE: The stage and lighting set up underground.

Bottles, vomit and rubbish were scattered across the centre as more than 500 kids made their way out. Many were sitting on the sides throwing up. The main issue was the rowdiness caused by these youngsters who were under the influence of alcohol. Young girls, dressed provocatively and intoxicated, walked by themselves.

According to CPF, there are several reasons why this party could be deemed illegal.

Firstly, the organisers needed to have JOC approval. JOC is the Joint Operations Committee established by the City of Johannesburg to ensure that all events held in Joburg are safe and that the event organisers comply with all bylaws and city regulations. This was not done.

The CPF informed us that the event also needed to meet certain guidelines. It did not have any medical assistance or police on standby but there were bouncers. The event also needed ample ablution facilities and fire extinguishers and there was none.

“When JOC representatives arrived at the scene they deemed the party illegal and asked patrollers, police and various other law enforcement units to disperse the crowd. Mondeor Sector 2, Sector 3 and some of the Moffat View and Booysens patrollers also came out to assist as this falls under the Moffat View Police Station precinct,” said one of the CPF member whose identity is being kept anonymous to prevent victimisation.

CPF at the scene also confiscated alcohol from children as young as 12-years-old who were walking around with five-litre wine caskets.

“Police and JMPD did not know about the event, and we are not sure about the centre management. If you look at the damage and destruction, I don’t think the centre would have granted approval of this event if they knew what was going to happen. Our main objective is to make sure everyone leaves peacefully so there is no further destruction of the property and then we will handle the situation upstairs and on the roads to ensure that kids who are under the influence of alcohol get home safe,” concluded the CPF.

Bouncers and one of the people who was hired to do the sound at this event who wished to remain anonymous said: “There was no way that this event could have happened without the knowledge of the centre management and police. One of the bouncers advised that the people who were organising the party had made arrangements with the centre and also approached the police to have this event and no one would have been able to know that so many kids were going to show up.”

Both the bouncers and sound crew were totally separate from the event and had nothing to do with it as they were just hired. One of the sound men said that they were hired by a young boy. It is still unclear who the organiser of this party was.

Around 10pm, the Mondeor CPF precinct and Sector 2 of the Moffat View CPF were assisting with evacuating the premises. By midnight the CPF, with the help from police and other emergency services, had cleared out the centre starting from underground. The crowds of people began creating havoc outside the centre and loitering.

We could not find the organisers or any of the people on the lineup. It is believed they left with the large crowds of people.

Later Comaro Chronicle received a letter from a concerned citizen who wished to remain anonymous. It read as follows:

“I am appalled at what I have just experienced at the Comaro Crossing. It is very clear to me that black kids’ lives don’t matter. I was led to believe that my son was attending a friend’s party in the basement which was to start at 6pm till 10pm. I initially found this somewhat alarming and odd but resolved that the centre management would most certainly be aware of this and all the necessary screening and security would be taken care of. I arrived at the venue to check it out as my 16-year-old would be coming later with his friends. At the entrance of the basement parking lot there were at least 50 kids and lots of alcohol. I would estimate from appearance the youngest kids ranged from 14-years-old and oldest possibly 16 or 18-years-old. Young scantily dressed girls and boys were unsupervised and behaved in the most unbelievable manner. I left as I was with my two younger kids and returned at 8pm to collect my son who I told I would pick up at 9.30pm. At this point, the party was well underway. More kids had arrived and were drunk and roaming the parking lot area holding liquor in their hands in a mall that is managed by Broll and this is well-kept and a recently renovated, posh area. Security personnel with guns were called to manage the chaos that was taking place on the premises. They were doing their very best to contain and control young, drunk, black kids. I don’t think that Sandton City or even Mall of the South would ever allow this. Is it because these are black kids? This must never happen again and I truly believe that Comaro Crossing should personally be held liable for anything that happens to any of those kids.”

‘Drug abuse is growing in SA’