A religious supporter of Oscar Pistorius yesterday welcomed his hero at court with a large homemade poster and a letter in which he claimed Pistorius had shot his girlfriend Reeva Steenkamp "in a moment of satanic rage". 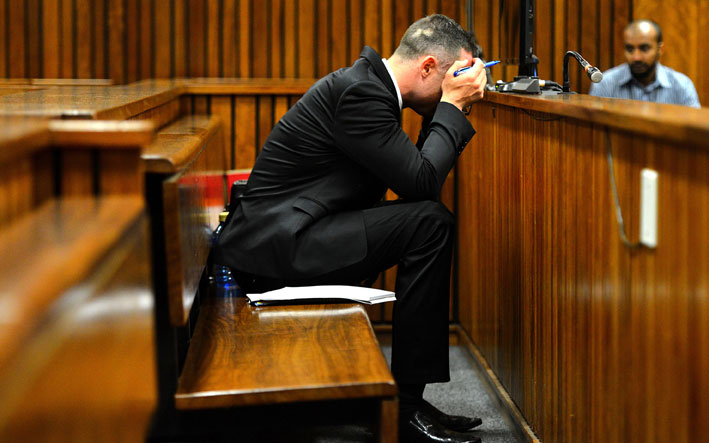 Paralympian Oscar Pistorius sits in the dock during a testimony at the high court in Pretoria on Monday, 5 May 2014. Pistorius is accused of fatally shooting his model girlfriend Reeva Steenkamp at his home in Pretoria in February 2013. He maintains that he mistook her for an intruder.Picture:Thobile Mathonsi/Independent Newspapers Ltd/Pool

Several other well-wishers also waited outside court for Pistorius holding signs and drawings. One mother, who told reporters she had disabled children, hugged Pistorius and then burst into tears while cameras flashed around them.

“Die arme seun (the poor boy)” an old man leaning on a walking stick, a cigarette dangling from his lips, muttered as Pistorius braved the cameras and fans before entering the court.

Ferdinand Eichstädt eagerly distributed photocopies of a strangely worded letter to journalists in which he, as CEO of an organisation called Action SA, begged Judge Thokozile Masipa not to send Pistorius to jail.

Eichstädt said he felt strongly that “although Oscar might have wanted answers and seek revenge of some sought (sic) in a quarrel with Reeva … really he did not intend to kill her, in the moment of satanic rage he fired the deadly shots into the blank door”.

He asked the judge to sentence Pistorius to community service, adding that his organisation would welcome him as an ambassador of their “international campaign soon to be launched”. The “campaign” seemed to focus on his organisation’s “message of preventative strategies… against the senseless violence, satanic and murderous onslaught of crime”.