Oscar Pistorius did not even know he had a treatable condition until he was recently diagnosed as suffering from generalised anxiety disorder (GAD), a forensic psychiatrist has testified. 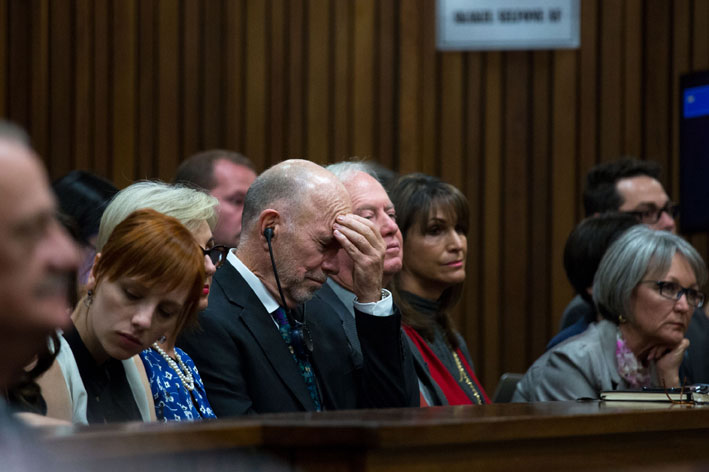 Arnold (C), uncle of paralympian Oscar Pistorius, is seen during his murder trial at the high court in Pretoria on Tuesday, 13 May 2014.Pistorius is charged with murdering his girlfriend Reeva Steenkamp. Picture: Daniel Born/The Times/ Pool

Merryll Vorster testified that Pistorius’s anxiety disorder might be relevant to his actions on February 14 last year, when he shot dead his girlfriend Reeva Steenkamp behind a locked toilet door.

Pistorius claimed he thought she was an intruder, but the State alleges he deliberately shot Steenkamp after a heated argument.

Vorster said she would not expect Pistorius to remember with crystal clarity what happened at the time, because of his GAD and because he was frightened at the time.

She testified that one out of every six people suffered from an anxiety disorder while still perfectly able to cope with life.

“Everyone worries. People with GAD are unable to set their worries aside and think about them constantly,” she said.

Vorster conceded that Pistorius had been able to cope with his life and still perform at a very high level despite his GAD, but said it came at a cost to himself.

“…Superficially he was coping, but he describes himself as a lonely person … His newer friends were friends he perhaps had to avoid being lonely. These were not people he would confide in,” said Vorster.

She did not agree with prosecutor Gerrie Nel that Pistorius’s GAD was severe enough that it could be seen as a mental illness.

“By definition, GAD is a psychiatric diagnosis, so one can say it’s a mental illness, But one has to look at the impact of that diagnosis on the individual’s capacity to live and socialise,” she said.

Vorster testified that she could not find any sign that Pistorius was delusional or paranoid, although his concern for his personal safety was greater than the average South African.

“Regardless of what the court finds happened during the offence, the GAD and vulnerability (because of his disability) would remain,” Vorster said.

Asked if GAD would still have played a role if the court found Pistorius knew Steenkamp was behind the door and that he had fired with the intention of killing her, Vorster said it would have, “because the individual with GAD would be anxious about losing a relationship”.

She said people with GAD were not dangerous people as such, but “probably should not have firearms”.