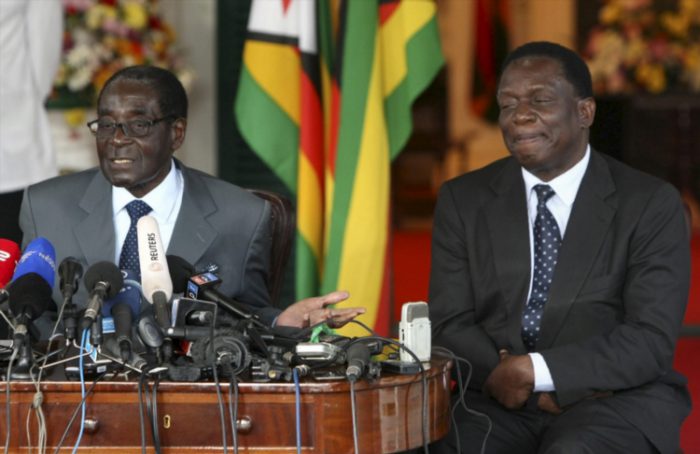 President Emmerson Mnangagwa has no ill feeling towards his former boss, Robert Mugabe, or his wife, Grace.

Grace Mugabe waged a sustained an anti-Mnangagwa campaign, who she saw as her strongest opposition in her bid to become Zimbabwe’s president using G40 support.

Responding to a question at a dialogue with youth to discuss Zimbabwe’s economic future, he said the accusations and venom that he endured during the rallies were not a reflection of who he was as person.

“I really thought that those who were making allegations against me and my colleagues, there were ignorant of who I was and who [George] Charamba was. They had a perception created outside our actual persons. If a person misunderstands you, pity him, you don’t get worried,” he was quoted by ZimEye News.

He is reported to have joked that because 10 presidential interface youth rallies were planned but only nine delivered, he was now finishing what Mugabe had started.

“The presidential youth interface rallies must have been 10, but we did nine, this one is the 10th, I realise that this 10th one will be different from the other nine.

Mnangagwa said he has great respect for his former boss and regarded him as a father, a founding father for Zimbabwe and luminary.

“I am where I am today because for 54 years, he has been holding my hand, but time comes when events can influence, because I believe age, he was surrounded by what others described as criminals.

“I don’t believe that some of the actions he did were his because of age,” Mnangagwa said.

He said because of the abuse on Mugabe by those who surrounded him at the time, he had no ill feeling towards his former boss and still communicated with him.

Mnangagwa said his administration was willing to dialogue with the youth and ensure that government is responsive to their needs.