It was left to Adv Adila Hassim, acting on behalf of the victims' families, to sift through the inconsistencies in Mahlangu's testimony. Former Gauteng health MEC Qedani Mahlangu, who was responsible and politically oversaw the termination of the Life Esidimeni contract, said the Esidimeni group had been benefiting from a long-term contract signed in 1979 in contravention of the The Public Finance Management Act (PFMA), and denied culpability during cross-examination on the tragic deaths of 143 mentally-ill patients transferred to unregistered NGOs unlawfully.

“At all material times, I did what was expected of me in my role,” Mahlangu repeated this statement as she physically turned to address retired deputy chief justice Dikgang Moseneke.

It was left to Advocate Adila Hassim, acting on behalf of the victims’ families, to sift through the inconsistencies in Mahlangu’s testimony and expose what were apparently holes in the story told by the former MEC of health to exonerate herself.

Mahlangu had earlier said she was the one who “initiated” the investigation of the 36 deaths she reported to the legislature (in fact, the number was 85 at the time) on September 13, 2016.

She also claimed that health ombudsman Malegapuru Makgoba had refused to investigate the deaths upon her request, as he perhaps didn’t “fully appreciate” the scale of the disaster unfolding at NGOs, with no expertise to care for patients.

“The ombudsman says it was the minister of health [who initiated the process]. Are you saying he was incorrect?” Mahlangu was asked. She repeated that on September 14, 2016, she called Makgoba and asked him to initiate the investigations. When he said that was unnecessary, Mahlangu claims she then had a meeting with Health Minister Aaron Motsoaledi, who assured her she would convince Makgoba to heed the request.

Hassim read from a text message from Makgoba to the then MEC, in which Makgoba said: “It is virtually unheard of to have 36 deaths rapidly – poisoning or overdose could be the cause of death. Toxicological evidence is necessary. Just remind the minister [Motsoaledi] to forward the letter of appointment.”

Mahlangu insisted this text message was written after the minister’s intervention.

She was then asked if she discharged her responsibilities diligently as enjoined to her in her position by section 95 of the constitution, that the MEC or a minister must discharge their duties as stipulated by the law. Mahlangu conceded that when her officials, and despite media and other NGO reports indicating otherwise, informed her only 36 patients died, she accepted the information first without interrogating or asking for a second opinion.

When she informed the legislature when answering a question from the opposition benches, Mahlangu said only 36 patients had passed when, in fact, the number was already 85. Hassim and Moseneke grilled her on whether she had acted responsibly and ethically, and her response was that she “trusted” the information she provided to the legislature, as she worked with highly qualified people.

“I had no reason to doubt it,” she said.

Mahlangu then admitted the information she presented in her evidence-in-chief that the deaths of 36 people were not unusual for the same period, as compared to deaths at Life Esidemeni a few years before the contract was terminated, was incorrect.

She informed the hearing that the analysis was prepared by then head of department Dr Barney Selebano, mental health director Dr Makgabo Manamela and different members of the mental health team, and she accepted it.

An analysis done by the ombudsman stated the deaths were eight times higher than the general population.

Manamela was then asked if she agreed that there was a correlation and causation between the process and the deaths. After initially refusing to give a direct answer, Moseneke directed her to, and she eventually agreed she had erred.

The information that the deaths of so many patients hardly four months into the transfer had averaged 12.8% was incorrect, but was, in fact, 22.8% and “eight times higher than the general population”.

Mahlangu was then made to account for the inaccuracies in the legislature response she gave to the Gauteng provincial legislature. It became evident that she had excluded information provided to her by the South African Depression and Anxiety Group (Sadag), South African Federation for Mental Health (SAFMH) and Section 27.

As far back as November 2015, a letter was forwarded to Mahlangu warning her about the potential risks of transferring patients.

She had also omitted a letter written to her by a Tshwane NGO, Precious Angels, in her response. “It is virtually impossible for me to know of every correspondence forwarded to my office,” she responded, and asked whether she had any basis for questioning the credibility of information provided to her by the organisation working within the mental health sphere.

She said she couldn’t remember the red flags sent to her office on the matter.

“Please get our legal team to get involved in the process. These NGOs are dishonest,” Hassim quoted from an email Mahlangu sent to Selebano, deputy director-general in the department Dr Lebethe and Manamela.

She denied instructing them, and said if that were the case, she wouldn’t have used the word ‘please’. Selebano had previously shared with the hearing he had carried out most of Mahlangu’s instructions out of fear.

Moseneke concluded on the first day of Mahlangu’s appearace – the “case has been characterised by disregard for professional ethics” and wondered about “the deep disregard and suspicion towards NGOs that worked in the field”. 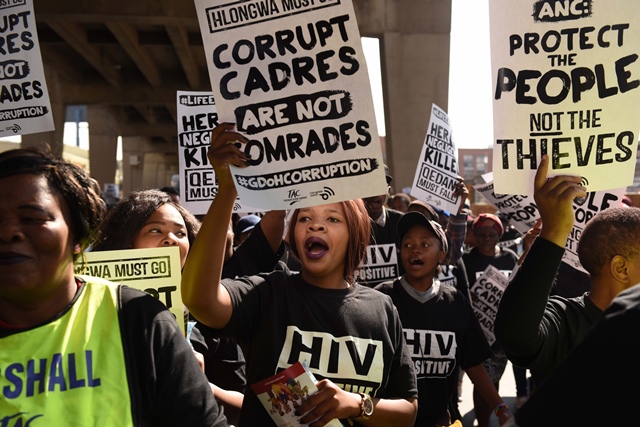