Zuma is alleged to have demanded immunity for him and his family, protection for the ministers loyal to him and the continuation of programmes he approved. 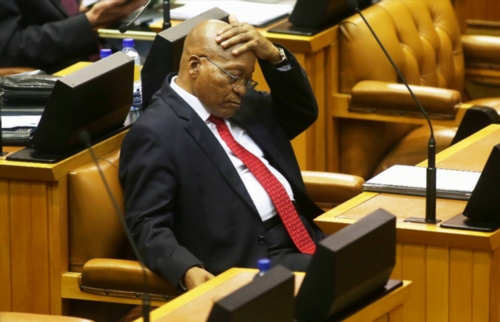 After allegedly spending a Sunday afternoon with his legal advisers, Kemp J Kemp and Michael Hully, embattled President Jacob Zuma is understood to have held a proverbial gun to the five members of the top six who met with him at his Mahlamba Ndlopfu residence in Pretoria last night.

When national officebearers, sans ANC president Cyril Ramaphosa, met with the man holding on to his position as head of state by a thread, he is believed to have presented them with a set of conditions that primarily centred on his own immunity from prosecution.

The hashtag, #ANCpilgrimage, while the integrity of the information provided could not be confirmed, indicated as early as 10pm that Zuma had balked at his Luthuli House bosses’ request that he step down before the state of the nation address (Sona) scheduled for February 8.

Earlier during the day, ANC national chairperson Gwede Mantashe told a congregation at a church in Katlehong, Ekurhuleni, that the meeting in the evening with the now ordinary ANC member Zuma would discuss what the party called a “transition”.

“We are not going to that meeting to humiliate President Zuma or to rough-handle him. We are going to have a discussion with him – what is in the best interest of the ANC, the country and the economy?” Mantashe told congregants of the St John Apostolic Faith Mission church on Sunday afternoon.

Information that appears to have been linked directly from the meeting painted a picture of a belligerent Zuma, who told the officials he could not be prosecuted, as he has done everything by the book. He is understood to have also demanded that all the ministers linked to him should retain their positions if he were to agree to step down.

The most audacious of the conditions is no doubt that “projects” and approved expenditure on programmes he authorised should not be canned. Recently, Zuma controversially rammed through a nuclear build programme despite strong rebuke from National Treasury that the fiscus would be put under tremendous pressure trying to fund the R2-billion bill.

Zuma is alleged to have dared the top six, once it has agreed to his conditions, to hold a press conference with him to clarify that he is not fired, and that they had resolved to put the country first. Included in his demands is believed to be that his family be protected from prosecution.

This was reportedly rejected, with UDM leader Bantu Holomisa telling the media this morning that his sources confided in him that Zuma told his political superiors: “If you have powers to remove me, do so.”

Holomisa said by challenging them to fire him, Zuma was showing signs that he was willing to go down with the entire party.

At about 11pm, giving a stamp of legitimacy to the #ANCpilgrimage leaks, Obakeng Moate from the secretary-general’s office (Ace Magashule) fired a text message to the national working committee members (NWC): “This communique serves to inform you about the NWC meeting scheduled as follows: Date: 05 Feb 18 (Mon) Time: 14h00 pm Venue: 11 Floor Boardroom, Luthuli House Apologies for the inconvenience caused.”