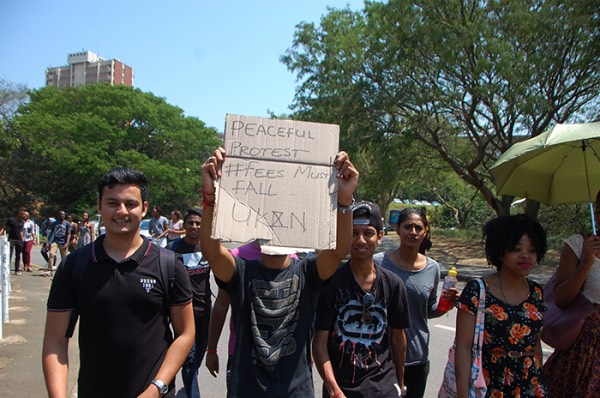 The University of KwaZulu-Natal students in the Westville campus just outside Durban KwaZulu-Natal joined the nation wide demonstrations at universities against the fee increments. Picture: Phumlani Thabethe

Over the next three years, the spending framework will include R57 billion which will be added to the baseline of the Department of Higher Education and Training for fee-free tertiary education and training for students from households earning less than R350 000 a year.

This was announced by Minister of Finance Malusi Gigaba during his budget speech in parliament today.

Gigaba said the largest reallocation of resources towards government’s priorities was on higher education and training, the fastest growing spending category at 13.7% per year.

“This government is proud to implement a major step forward towards our ultimate goal of guaranteeing access to higher education and training for all South Africans who qualify based on merit, not on class position,” Gigaba said.

“Government will phase in fee-free higher education and training to students from poor and working-class families,” the minister said.

The R350 000 threshold will apply to all new first-year students at universities and TVET colleges in the 2018 academic year who will be funded for the full cost of study.

“This will be rolled out in subsequent years until all years of study are covered,” Gigaba said.

He added that returning students who have loans with NSFAS  will have their loans for 2018 onward converted to a bursary.

“This is an important step forward in breaking the cycle of poverty and confronting youth unemployment as labour statistics show that employment is lowest for tertiary graduates,” he said.

The minister said the fee-free higher education issue should not only be viewed in a context of cost and how the country can source funding for it during difficult economic times.

“This is a historic development. Under apartheid this country spent decades deliberately under-educating the black child, the African child in particular and trying to break their backs,” he said.

He added that sacrifices have been made by different generations of youth and student activists, some sacrificing their own lives to access quality education.

“The Freedom Charter calls for the doors of learning and culture to be open to all and continues to insist that, I quote, higher education and technical training shall be open to all by means of state allowances and scholarships awarded on the basis of merit, close quote,” he said.

Gigaba said by ensuring that the children of the poor and the working class access higher education, those that struggled during apartheid are being honoured. He said these include Bantu Steven Biko, Hector Peterson and Bathandwa Ndondo, to name a few he mentioned.

“We give credence to the sacrifices of our youth and salute the youth for the sacrifices they have made over the years to bring South Africa to where she is today,” he said.