Peter Ndoro ‘humbled’ by messages of support after ‘killing off Ramaphosa’

The seasoned news anchor will be back on our screens again on Monday after taking a bit of time to recharge his batteries. 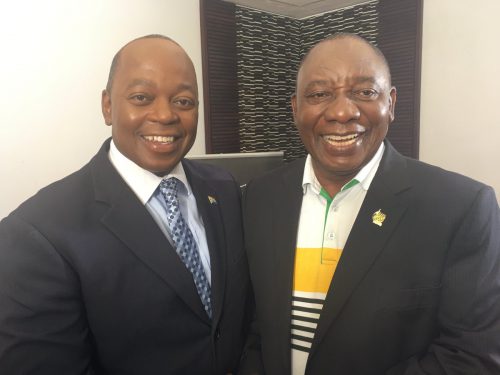 SABC news anchor Peter Ndoro says he is humbled by the outpouring of support and encouragement he received from members of the public, journalists and politicians after he mistakenly declared on national television earlier this month that President Cyril Ramaphosa had died in Zimbabwe.

He was meant to have referred to the late Morgan Tsvangirai.

Taking to Twitter on Friday morning, Ndoro thanked Ramaphosa for “graciously” accepting his apology.  He said he would return to work on Monday.

Thank you to everyone who sent me warm messages of encouragement & support. I’m truly humbled. Special thanks to President @CyrilRamaphosa graciously accepting my apology understanding it was a genuine human moment. Thank you ????????. I look forward to work at #sabcnews on Monday pic.twitter.com/qMFrkRwDjW

Last month, he apologised to viewers for declaring that IFP leader Prince Mangosuthu Buthelezi had also died. The veteran journalist indicated to SABC management that he was fatigued and was taken off air to rest.

These are some of the messages of support he received:

Dear @peterndoro I'm only surfacing now and I didn't even have your manic workload in front of bright, unforgiving lights, keeping LIVE pace with a story with more things breaking than a Greek restaurant. I respect you my friend. You're human. Don't let this hurt you. All love.

Being in the forefront of anchoring LIVE television is a truly daunting task & more so now with the ongoing & never ending cycle of political upheavals in SA…I take my hat off to @peterndoro for being a true pro & despite a human error or two remains on top of his game!????????

You’re a consummate professional @peterndoro! We worked under the most pressurized conditions this week that nobody can ever in their wildest dreams imagine. The only thing you did wrong was show you were human & not machine! Go rest my friend see you soon.. pic.twitter.com/sNxBB8T1z7

He has earned that support with his decency, integrity and love.
He is a kind human being.

And kindness is the deepest form of bravery. https://t.co/o3I2MwrZAu