It was not a raid, but a search and seizure, Hawks say

The Hawks say the unit did not raid Jacques Pauw's house, but rather conducted a search and seizure. 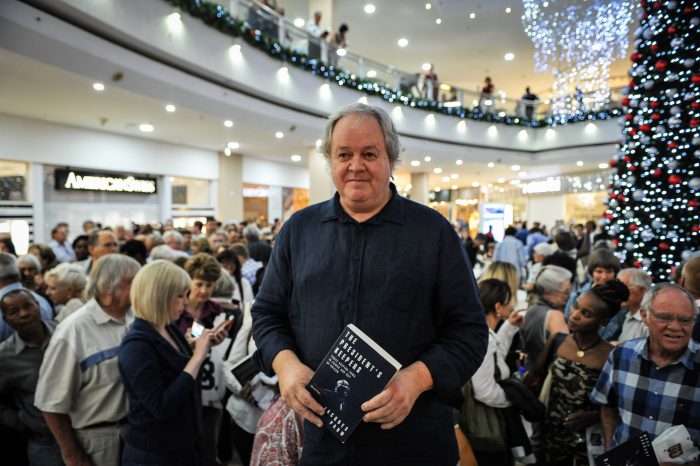 Jacques Pauw poses for a picture at Brooklyn Mall during the launch of his book, The President's Keepers, 11 November 2017, Pretoria. Picture: Jacques Nelles

Three Hawks officers visited and went through the house of The President’s Keepers author Jacques Pauw on Wednesday afternoon searching for secret intelligence documents it believed were in the author’s possession.

The spokesperson of the special investigative unit, Brigadier Hangwani Mulaudzi, told Power FM this morning he was baffled by the use of the word “raid”, saying it made the search conducted by the officers seem dramatic, as if the officers had kicked down doors to gain access to Pauw’s place of residence.

Mulaudzi said the search was in response to a complaint linked to Pauw’s book that was laid last year with the Hawks, which has been under investigation.

“Allegations have been made that he might have secret documents, classified information that belongs to the state, and as such a decision was taken together with the NPA that we should apply for a search and seizure warrant,” Mulaudzi said.

“The members were very courteous, and he was happy with the way the members conducted themselves. There was no fighting, and he was aware that this kind of thing might happen,” he said.

Maluadzi said it was understandable that Pauw would question the timing of the search considering that the book was released about four months ago.

He asserted that no malice was intended and the search went accordingly. He further stressed that the decision to search Pauw’s home was not influenced by politics.

Mulaudzi said according to the complainant, the book contains classified information from government institutions such as Sars.

“You cannot allow a situation where somebody hacks into your, let’s say, your account and then that particular person goes and spreads it all over and says you’ve got millions in your account. That is your personal information, so you have the right to go and complain about it,” he said.

He added the contents of the docket would remain confidential until the investigation had been finalised.

He refrained from confirming whether the officers conducting the search seized any documents from Pauw’s house.

“But there is information that they got which they will use if it is necessary; if not, then tough luck,” Mulaudzi said.

Speaking on the same radio show, Pauw confirmed he was in possession of “an extensive amount” of State Security Agency documents that he quoted in his book, but said he expected the raids to have taken place soon after the publication of his book.

“When the colonel walked into my office yesterday, I asked him, ‘Colonel, do you honestly believe that you are going to find any state security agency documentation lying around in my office?’ It would have been idiotic for me to have done so. So I don’t know what they were looking for, and I quite frankly don’t understand why this raid happened,” Pauw said.

He added the Hawks officers seized chapters of the book he had printed for a final read before it was published as well as a contract he had signed with a filmmaker this year who wanted to buy the film rights to the book, adding the officers said it was an important document.

Pauw said the raid was laughable for him because the officers were visibly uncomfortable and had relayed to him that they were only carrying out their duties.

“I don’t blame the officers who were here yesterday. What I want to know is, somewhere in the top echelons of the Hawks, there is a commander or general sitting there that instructed them to do this raid. Why, why raid the premises of a journalist? I don’t think this has ever happened since 1994,” Pauw said.

He added he did not believe President Cyril Ramaphosa was complicit in the raid, but that the search indicated that despite recent political changes, little had changed within the police.

Minister of Police Bheki Cele, speaking on Radio 702, said he would look into the details of the investigation and obtain updates from the investigators, and that should the need arise then all those mentioned in the book would be investigated.

Cele said today he would be meeting with the head of the Hawks and that, going forward, allegations levelled against members of the unit would be investigated.