I spent all weekend playing the Destiny alpha There has been, in case you missed it, a tremendous amount of hype about this game. It is, after all, the first game Bungie has released since 2010’s delightful Halo: Reach.

I don’t need to give you background on the subject; you can find more information about Destiny over on this link that will take you to two pages worth of Destiny articles we’ve written here on NAG Online. Alternatively, you can check out Pippa Tshabalala’s cover feature for this month’s edition of NAG Magazine.

I was playing the alpha on a PlayStation 4. After a 6GB download I dove straight in and didn’t experience any disconnects or server downtimes throughout the long weekend. It’s also worth noting that I have a pretty rubbish 2MB line that has lately given me no end of hassles; still, it seems that Destiny’s netcode is pretty solid. Of course, that could be because this was just the alpha and as such the servers weren’t under full load.

Be that as it may, I went in expecting the worst and didn’t experience any lag at all – even when things got super hairy with a bunch of enemies onscreen at once, and another four online players offloading clips at them. 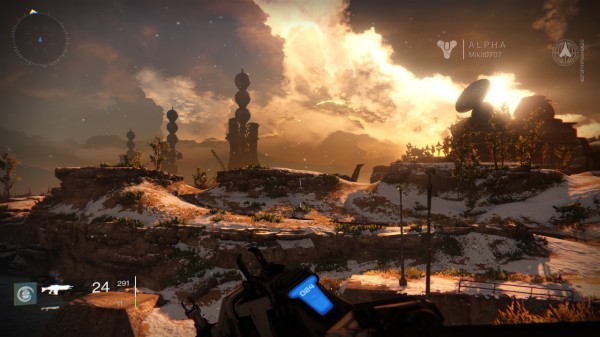 The Hunter class was always going to be my first pick; I like the idea of playing a frontier explorer in science fiction games, so the class was right up my alley. The character creator is perhaps a little limited in customisation options. There are three races you can choose from, and then you can pick between playing as a male or a female. Races include Humans, the Exo (kind of like robotic skeleton-ey things), and the Awoken (pretty much just blue Humans, only they have that typical, holier-than-though alien superiority complex).

You can choose between a variety of predefined faces, so don’t expect to be adjusting sliders to gain that perfect character face. Aside from that, you can change eye colour, face markings (like warpaint) hair style and hair colour. Again, options are rather limited so Destiny seems like one of those online games where it could be possible that you’ll run into somebody else who looks like you.

As awesome as the characters look (skin texture and lighting effects are very impressive), I was a little disappointed by the seemingly limited selection of customisation options. Each class gets access to specific armour sets so that classes are distinguishable in the game-world. Weapons, however, are open and there didn’t seem to be any class specific guns. I played long enough to get my Hunter up to level 8, with each character level increase unlocking a new skill or passive stat buff. This was my first time I’d been hands-on with Destiny, and I was surprised by how linear the skill tree progression is.

Hopefully the full game will provide more choice because as it stands my level 8 Hunter is going to be identical to yours save in gear appearance and weapon loadout.

Speaking of loadouts: you get access to a Primary weapon and a Secondary weapon. Bungie chose to start players off with a selection of Primary weapons spanning semi-automatic rifles, fully automatic rifles and long-ranged “scout” rifles. The Secondary weapon slot is reserved for guns like shotguns and sniper rifles. Once you hit level 5 you get your Heavy weapon slot unlocked, which is automatically filled with a rocket launcher. Whether or not this was just for the sake of the alpha is still to be seen. 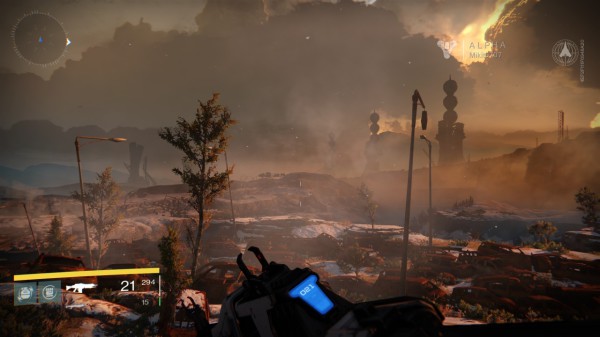 Weapons and combat is where this game begins to feel unquestionably like a Bungie title. You can feel Halo’s DNA all over the combat in Destiny, and that’s a very, very good thing. Halo has some of the most refined first-person combat for a console shooter, and Destiny follows in that series’ footsteps. Combat, which you do a lot of in Destiny, is fast and heaps of fun. In addition to your guns you get access to a grenade that is unique to each class; the Hunter gets an incendiary grenade. You don’t get a set amount of grenades to lob at enemies, but rather you only ever have one that’s on a cooldown timer. Certain special items of armour can lower that cooldown time.

In addition to grenades you also have a melee attack which saved my life on countless occasions; each class has a specific melee attack, so the Hunter has a knife, but the Titan class just punches enemies right in the face. Your melee attacks upgrade as your character level increases, so eventually my knife would have been imbued with an electrical effect had I reached a higher level. Finally, each class has an active ability that can be used when things get tough; once activated you need to wait for the ability to recharge. 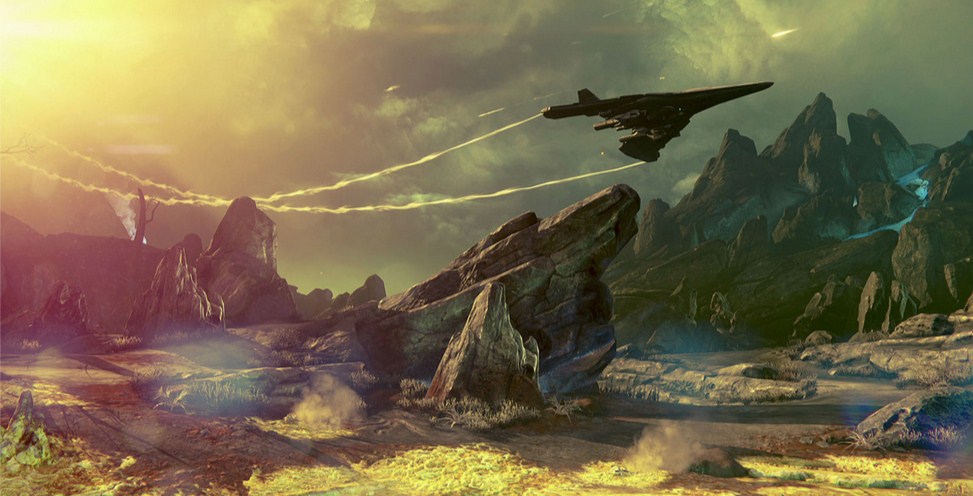 The Hunter gets to summon a flaming hand cannon (read: revolver) with three shots in the magazine; it causes significant damage. Again, there’s going to be more in the final build of the game; this is just what I had access to in the alpha. It felt rather Borderlands-ey in execution, which again is a good thing.

Visually Destiny is very impressive, with some amazing lighting and wonderfully expansive environments that really capture that feeling of exploring a vast open area.

In the alpha we had access to one story mission (a brief but tense affair that was over in about 15 minutes), the Tower (which serves as the social hub for the game), an Exploration environment (which was set in a the same area as the aforementioned story mission, but with randomly generated side quests that had you exploring the massive game area of old Russia), and a three player online mission called a Strike. Regardless of the missions available, my time with the Destiny alpha made it clear that there is enough latitude here to play the game by yourself if that’s what you want. If you want a good old Bungie science fiction shooter full of space mythology and alien creatures, then you’ll get that. That being said, the most fun I had during the alpha was when I’d created a three-man fire team with another two friends, and the three of us were completing random side missions in the Exploration mode.

Despite the fact that many of those side missions feel like a typical MMO grind, it was still good fun and that’s entirely thanks to the game’s combat. A three-man fire team with two other friends turned out to be a lot of fun and a natural fit for the game’s canon about a group of Guardians exploring the frontiers of Earth.

With only one area open to explore in the game, I thought I’d seen all there was to see in the alpha. That, however, was not the case and it seemed to me that this was something Destiny was very good at: there’s almost always somewhere new to discover; there always seems to be another hidden cave to explore or another canyon to be revealed. This is actually how my time with the alpha ended: I returned to an interior factory setting that I’d previously cleaned out with another friend.

This time I was on my own and the enemies were back (sadly the enemies respawn rather quickly; that’s thanks to the MMO nature of the game I guess, but Far Cry 2 has NOTHING on this one), but after a brief firefight I set about exploring the small area more thoroughly than last time. Lo and behold I found a passage tucked away behind some boxes.

This passage disappeared into the gloom of the abandoned factory. I followed flooded corridors and creaking catwalks for what felt like ages; the attention to detail is what kept me pushing forward because around me this factory was decaying, rusting, and falling apart. Light fittings fell from the ceiling as I walked underneath them; streams of water gushed out of cracks in the ceiling, creating puddles on the floor. I felt like I was completely on my own and on the frontier exploring forgotten buildings from humanity’s past; it was a wonderfully compelling little stretch of gameplay.

Eventually I came out the other side of the factory to find an old freeway littered with piles of rusting cars. People had tried to flee this area, but all that was left was a congested freeway populated by the brown husks of forgotten vehicles. A dust storm was whipping through the area, and I could hear the grains of sand “pinging” off the rusted car surfaces.

I felt like I’d made a new discovery; there wasn’t another player in sight and I hadn’t seen an enemy for at least fifteen minutes. It was just me and the wilderness, and I uttered an audible “woaw” as my eyes adjusted to from the gloom of the factory interior to reveal the scene I’ve just described.

That was all I really wanted Destiny to give me: a sense of exploration and a choice to explore with friends or by myself. I’ll admit that I was a little underwhelmed by the concept of Destiny, but having spent the long weekend playing the game, I’m definitely looking forward to the final release in September.