The wild cat species is thriving in the shadow of the Secunda Synfuels Operations plant in Mpumalanga. 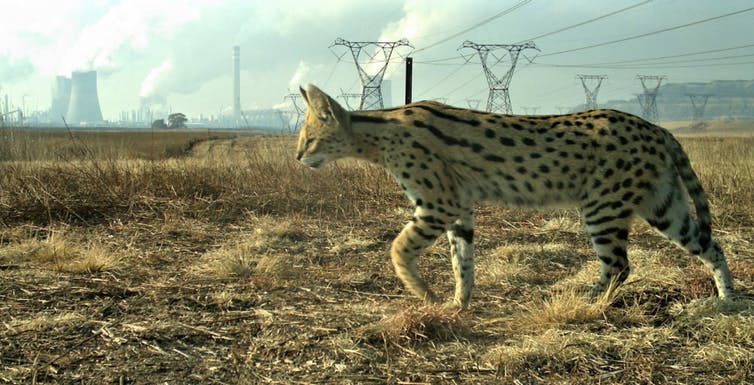 A serval captured on a camera trap at an industrial site in, South Africa. Photo: Daan Loock

Ever since the industrial revolution, human activities have resulted in rapid environmental changes including degradation, fragmentation, and destruction of habitat, climate change and biodiversity loss. Animals, such as large carnivores, are often among the first to disappear as human disturbance increases.

The fact that human activities have had catastrophic consequences for some species is undisputed. But there are also instances where wildlife has befitted from human interventions, such as raccoons and coyotes that flourish in urban areas. This is because they can exploit resources like food and low levels of competition from other species that are less able to adapt.

We made a startling discovery that provides another example of wildlife thriving in an industrial site. We found that servals, a wild cat, were living in the shadow of a huge petrochemical plant in South Africa.

Using repeated camera trap surveys we found that serval were present – and thriving – at the Secunda Synfuels Operations plant 140 km east of Johannesburg. Constructed to help cope with the fuel embargo imposed on apartheid-era South Africa, the plant processes coal into a petroleum-like product.

As part of this production process it emits 20 million tons of carbon dioxide per year. The plant, which covers an area of around 85 km², supports a serval population density – the number of animals in a given area – far greater than any other site on record across the entire range of the species.

Over several years we also used live traps to capture and release servals at the plant, allowing us to identify their sex and age – something that was not possible using our camera traps. This showed us that the population structure appeared to be stable and normal. This suggests that the high density was not a temporary situation, but a long-term trend.

The cases of modified environments benefiting wildlife should not be taken as evidence that industrialisation is generally a good thing for wildlife. As humans modify natural habitats, biodiversity tends to suffer, and it is of paramount importance that we curb our impact on the environment. But our findings suggest that even heavily industrialised sites can still have conservation value.

We should not overlook these areas when developing conservation plans as they can still play a role in protecting threatened species.

Why wildlife is thriving at an industrial site

We think that there are three main reasons why servals fared so well in this modified environment. The petrochemical plant is surrounded by wetlands, which are home to a large number of rodents, the preferred prey of servals. This provides an ample prey base, which supports a large serval population.

Secondly, there is a fence surrounding the plant, for safety and security reasons. This protects serval living at the plant from persecution from humans. In other areas, serval numbers can be controlled by persecution from farmers, who perceive servals to be a threat to their livestock.

Finally, while the fence is intended to restrict the movement of humans, it also stops other large carnivores from entering the area. This keeps competition low, allowing serval numbers to grow.

Industrial installations often establish exclusion zones around their core infrastructure to improve security and safety. These can also benefit wildlife. Reserves were created around the Jwaneng diamond mine in Botswana and the Venetia diamond mine in South Africa, for example, which now support a broad array of large mammals such as elephants, African wild dogs, and cheetahs.

And some of these reserves set up to protect mines, such as the Sperrgebiet exclusion zone in Namibia, have now even been proclaimed national parks.

As well as protecting habitats, modified environments sometimes create entire novel ecosystems, that can sometimes increase local richness. Oil rigs, while being unsightly, can act as artificial reefs that offer protection from trawling and support diverse communities of marine life that would not otherwise exist in the area.

There is enough doom and gloom in conservation. Celebrating silver linings such as servals at Secunda will help us shift our focus from problems to solutions, as advocated by the Earth Optimism movement. This is key to moving from a sense of loss to a sense of hope in the dialogue about conservation and sustainability, which is critical for securing the public support, political will, and resources to stem the tide of biodiversity loss.