The party's spokesperson has come out in support of an extremely insensitive social media comment causing widespread outrage. Black First Land First (BLF) spokesperson Lindsay Maasdorp has come out in support of a comment by Facebook user Siyanda Gumede, in which he said he “doesn’t have a heart to feel pain” for the three children who died after the tragic collapse of a walkway at Hoërskool Driehoek in Vanderbijlpark, who he assumed to be white.

The races of the victims of the disaster are not yet known. Hoërskool Driehoek is reportedly a dual-language school.

This didn’t stop Gumede, who was responding to an SABC post on the tragedy, from arriving at the conclusion that the three children were white. He tweeted that he was unmoved by their deaths, as they would eliminate “3 future problems” from the world.

Unsurprisingly, the post was met with instant outrage from social media users across the racial spectrum. Gumede’s Facebook account has since been blocked to the public amid the outcry he has been receiving.

According to the BLF spokesperson, Gumede was “correct” in posting the comment.

Maasdorp’s tweet continued to say that he believed that the incident showed “God is responding”.

“Why should we frown on the ancestors’ petitions to punish the land thieves including their offspring,” he added. 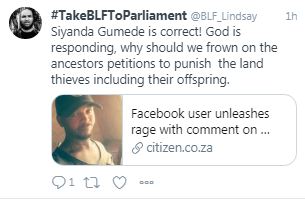 While not many had reacted to his tweet at the time of publication of this story, Maasdorp was already being slammed for his words, with one user calling him “psychopathic”.

Who is GOD punishing when people die is shack fires? Your logic is psychopathic, u need help.

When asked for clarification by The Citizen, Maasdorp said he was “not certain” the victims were white, adding he would mourn them if they turned out to be black.

But he added: “If our God has finally intervened and our ancestors have petitioned and seen that these white land thieves have now died then I definitely celebrate it. I celebrate the death of our enemies, their children, their cats and their dogs. That is our position.”

The BLF spokesperson has expressed similar views before.

Maasdorp came under fire in 2016 for posting on both Facebook and Twitter that “I have aspirations to kill white people, and this must be achieved!”

Last year, he had a run-in with the author of this piece, telling me my “existence is a crime” because I’m white.

READ MORE: Mngxitama raises ire after call to kill whites along with their dogs and cats

The party’s leader, Andile Mngxitama, incited widespread rage late last year for similar reasons, after making hugely controversial comments at a rally calling for five white people to be killed for every black person, which he later claimed would be done in self-defence.

Many disagreed, with parties and organisations including the DA, Cope, and AfriForum laying charges against him, and the ANC releasing a statement calling his comment “an attempt to set us back to the dark ages of apartheid”.

The BLF has been accused of hate speech several times by the South African Human Rights Commission, which has recommended that the party be prevented from contesting the 2019 elections on the grounds that they have made statements violating the Electoral Act.

The IEC warned the party against further hate speech, but also said they couldn’t take action against them due to the comments coming prior to the election date being announced.

UPDATE: This article has been updated to reflect that Maasdorp deleted the tweet. 16:02, February 1.