Shepherd Bushiri: The rise and fall of Pretoria’s most loved and loathed ‘prophet’

The ECG leader reportedly bought his four-year-old daughter a new Maserati Levante believed to cost anything upwards of R1.65 million. The Enlightened Christian Gathering (ECG) church draws arguably the largest crowds compared to any other congregation in Pretoria. Streets adjacent to the church, which is housed in the vast Pretoria Events Centre, are a hive of activity on many days each week as vehicles bearing registration plates from all South African provinces stream into the vast enclosure for evening prayers.

The weekly Sunday church services are Pretoria’s indisputable showstoppers, drawing crowds of diverse races from all over.

Testifying at the Commission for the Promotion and Protection of Cultural, Religious, and Linguistic Communities (CRL Rights Commission) last month, the ECG leader, charismatic self-proclaimed “prophet” Shepherd Bushiri, narrated how he founded his Prophet Shepherd Bushiri Ministries (PSBM) in Mzuzu, the third largest city by population in northern Malawi. The ECG Church is an arm of PSBM.

“The church began its operations in Malawi in 2010 and over the years it expanded through establishment of branches in different countries, among others Zambia, South Africa, Botswana, Kenya, USA, India, and Australia. Operations in South Africa began in 2012 wherein it was formerly constituted and legally registered with CIPC,” a jovial Bushiri, seated next to his elegantly dressed wife “prophetess” Mary, told the commission in Johannesburg.

“I then joined South Africa [branch] as the general overseer later in 2015. As of today, ECG has branches in over 178 countries across the world. All these branches are governed by an umbrella body, the ECG International Church, which has its headquarters in Pretoria, South Africa. I am the president of the church.”

CRL Rights Commission chair Thoko Mkhwanazi-Xaluva was intrigued with Bushiri’s assertions on the massive crowds drawn by the ECG. The preacher said its year-end crossover event in 2017/18 attracted 100 000 people and its 2018/19 events drew a “minimal” 60 000 congregants.

“Let’s go to the bigger plan … the church started with how many people? Right at the beginning,” Mkhwanazi-Xaluva asked Bushiri.

Bushiri said in 2012 the ECG started off with just 35 congregants. By 2015, when he arrived in South Africa to lead the church, there were around 200 members.

Three women were killed in an apparent stampede at the ECG church during a service on December 28. At least 17 other congregants were injured as they ran for shelter during a heavy rainstorm.

The three deceased women were identified as Patricia Pringane, Matshila Sarah Mohlala, and Lehlogahlo Maria Segodi. In the aftermath, the South African National Civic Organisation (Sanco) led protests at the ECG, with community members calling for the church to be expelled from the Pretoria showgrounds forthwith and for Bushiri to be deported back to Malawi.

The South African watchdog on matters of religion, the CRL Rights Commission, quickly stepped in, initiating a mediation process in which Bushiri, City of Tshwane former mayor Solly Msimanga, and Sanco Tshwane chairman Abram Mashishi were called to testify.

The report on the mediation process, publicly released last Friday morning, cleared Bushiri and the ECG of wrongdoing in hosting their December 28 gathering.

“Part of our findings is that SAPS [South African Police Service] did not adhere to the [Safety at Sports and Recreation Events] Act, which then makes it a very difficult situation. In terms of what happened to the bodies [of the three stampede victims], who moved the bodies [from the premises], we are all waiting for the police to tell us who did what and who did not do what. They are the experts in this matter, but the church has given us their version. We are waiting for the police’s version,” Mkhwanazi-Xaluva told reporters in Johannesburg.

It was to be a bittersweet victory for the multitudes of Bushiri devotees. While they celebrated their newfound mojo, news soon filtered in that Bushiri and his wife had been arrested on the same day for unrelated crimes by the elite Hawks unit of the SAPS at their plush Sparkling Waters Resort in Rustenburg in the North West.

According to a statement released by Bushiri’s church: “They took the prophet and our mother prophetess Mary Bushiri in handcuffs to Pretoria. They have charged our father with fraud and money laundering. As you will remember, from last year, we have struggled with reports that our father was guilty.

“We have repeatedly learnt from different media houses that we were under investigation. At some point accurate reports pointed out the fact that certain people within the police had demanded bribes amounting up to R10 million,” the statement said.

Hawks spokesman Brigadier Hangwani Mulaudzi said in his statement: “The Hawks’ case against the pair concerns alleged offences of fraud, money laundering, and contravention of the Prevention of Organised Crime Act (POCA) committed from 2015 in relation to Exchange Control Regulations related to foreign currency in an amount of 1 147 200 USD.”

Mulaudzi said the couple, who run several business enterprises in SA and abroad, were expected to appear in the Pretoria Specialised Commercial Crime Court on Monday, February 4.

The ECG leader often makes newspaper headlines in SA. In December 2017, Bushiri reportedly bought his four-year-old daughter Israella a gift which set tongues wagging. The “Man of God” blessed his first-born daughter with a spanking new Maserati Levante believed to cost anything upwards of a whopping R1.65 million.

This was only a few weeks after the preacher was in the headlines for splashing out on vehicles for his staffers. According to reports, Bushiri also owns private jets which he uses on his many trips across the globe where he runs businesses and the church ministry. 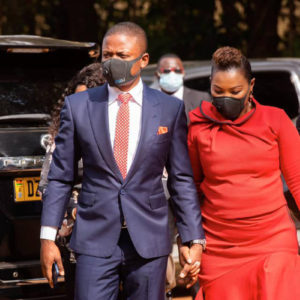