The little girl has been unofficially named Sibanisethu - meaning 'our light' - by residents of the neighbourhood where she was found. 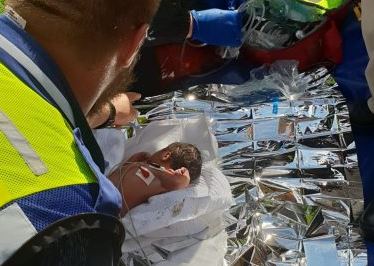 Paramedics attend to the baby girl after she was rescued from a storm water pipe in Barracuda Drive, Newlands East, Durban, 11 February 2019.

The Durban baby who was rescued from a stormwater drain earlier this week has been unofficially named Sibanisethu (Our Light), the Department of Health said today.

The infant, who was rescued from the drain on Monday in Newlands East, is doing well, Health MEC Sibongiseni Dhlomo said in a statement.

“We had a briefing from management of the Durban hospital where the baby is being cared for. The little girl has been unofficially named Sibanisethu by residents of the neighbourhood where she was found.”

He said she would be taken to a place of safety once discharged.

Her attending physician at Chief Albert Luthuli Hospital previously called her a miracle baby, saying that her survival in the drain was “incredible”.

The child’s cries were heard around 07:30 on Monday and passersby alerted authorities.

Skilled officers had to burrow into the ground and stabilise the area around a pipe. The child could be heard during the entire rescue.

Her only ailment when she was admitted to hospital was that her temperature was low. Other than that, she was given a clean bill of health.

Police are investigating how the child ended up in the drain.