FF Plus’ Peter Marais: Why the ANC will stay in power until Jesus comes 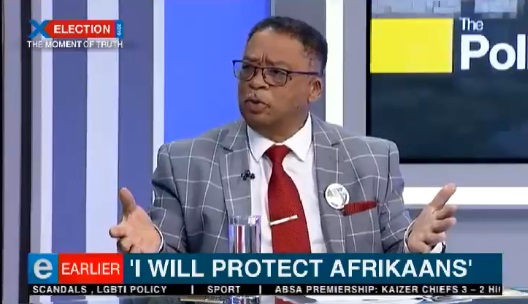 Freedom Front Plus’ Western Cape premier candidate, Peter Marais, known for moving between political parties, has dismissed claims that he is a political opportunist.

Marais, during an eNCA interview over the weekend, said he would jump off any “bus” that did not align with his values.

He justified his moves, among others, from the National Party of FW de Klerk, the New National Party of Martinus van Schalkwyk, Tony Leon’s Democratic Alliance, Musioua Lekota’s Congress of the People, and now to Pieter Groenewald’s Freedom Front Plus as necessary changes he had needed to make to remain true to his principles.

Among his other political homes was the New Labour Party, which he founded in 2004 after his resignation from the New National Party. The party won only 0.09% of the vote in the 2004 nationwide election and 0.67% in the Western Cape provincial election.

Before joining the Freedom Front Plus, he was briefly with the Independent Civic Organisation of South Africa as the party’s Cape metro chairperson and had also been part of the New Labour Party and the Bruin Bemagtiging Beweging.

He previously served as the premier of the Western Cape, for half a year between 2001 and 2002, and was Cape Town mayor for about a year prior to that.

“If I’m on a bus and I bought a ticket to go to Cape Town and that bus changes routes, I jump off the bus. I don’t stay on the bus because I want my salary or my ticket money back. I leave a [political] party when a party changes direction and it goes in a direction that clashes with my principles. And that is why the ANC will stay in power, because journalists tell them, if you join a party, you die in that party. That’s why the ANC will stay in power until Jesus comes like [Jacob] Zuma says.”

Marais, who is now on a mission to bring back Christian values in the education system, said his party was steadfast in protecting the Afrikaans language and culture.

He and the FF Plus want Afrikaans taught at schools and Technikons.

“We want autonomy, we want the full say over education.”

Asked if the party would equally protect other minority languages such as Xitsonga and Tshivenda, Marais said the SA Human Rights Commission had given government a report in 2016 that said Afrikaans and most indigenous languages were suffering, as English had become the “main colonial language”.

The Freedom Front Plus launched their manifesto at the weekend and proposed privatising state entities, reducing Cabinet to 16 ministers, not letting government go over budget, and opening affirmative action-free economic zones.

The party maintained their position on opposing expropriation of land without compensation and were in favour of redistributing unused state-owned land. The party’s manifesto said the Freedom Front Plus would protect heritage do away with race-based policies.