Reports of a deadlock in talks with the franchise as well as his involvement with the Boks rubbished as he pens new deal. 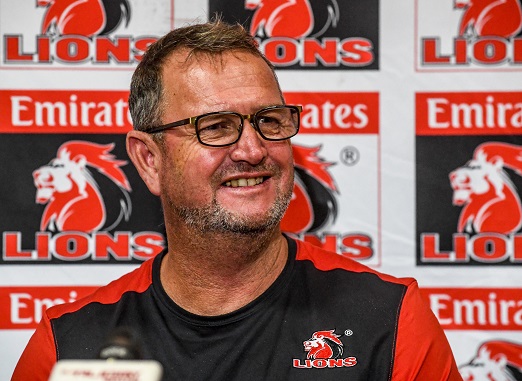 Swys de Bruin’s commitment to the long-term success of the Lions was reiterated on Tuesday after the franchise announced that he’d extended his contract for another two years.

A weekend report had alleged that the 59-year-old and the suits from Ellis Park had reached deadlock in their talks, with De Bruin apparently becoming increasingly frustrated.

If there was any such animosity, it wasn’t observable.

“It’s a great opportunity and honour. There’s trust in me,” said De Bruin.

“We want to finish what we started.”

The genial mentor, known particularly for his abilities as an attacking coach, admitted that there were other “opportunities” presented to him.

De Bruin gained wider fame in 2018 when Springbok coach Rassie Erasmus enlisted him as a consultant for the national side.

“It’s a big world out there. But after a lot of consideration, I decided I needed to stay here. It was never about other stuff that I read in the paper about. We’ve got seven U-21’s in our current match squad. Imagine where they’ll be in two years. It’s a fantastic group.”

His new deal also dispels any rumours that his Bok portfolio will eventually mean he’ll ditch his franchise responsibilities.

“Rassie wants me to do the attack, but only after Super Rugby,” said De Bruin.

“To date this year, I’ve only had one day where I was involved with the Boks and that was at an alignment camp when we had our off-week. Rassie honestly wants me to focus 100% on my job at the Lions. That’s his policy, I promise you all.

“There’s no interference. He wants the franchises to do their thing,”

When will World Rugby clean up its messy rules?
6 days ago
6 days ago
PREMIUM!

When will World Rugby clean up its messy rules?
6 days ago
6 days ago
PREMIUM!