Style once again leads to no substance for Robbie Fleck's troops, who are now in deep trouble in this Super Rugby campaign. 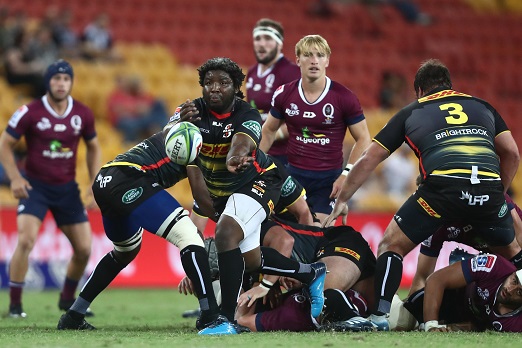 Scarra Ntubeni of the Stormers passes during the round eight Super Rugby match between the Reds and the Stormers at Suncorp Stadium on April 05, 2019 in Brisbane, Australia. (Photo by Chris Hyde/Getty Images)

The Stormers are now unravelling in familiar fashion in Australasia after suffering a third consecutive defeat in their Super Rugby campaign, losing 12-24 to the Reds in Brisbane on Friday.

It wasn’t a match of particularly high quality, but the home side’s superior finishing and fine defence proved enough to carry them over the line.

Meanwhile, the Capetonians’ failings remain familiar – they created a lot of opportunities, but simply don’t have the tools to round them off consistently.

The hulking Samu Kerevi was a familiarly menacing presence for the home side, causing massive headaches in midfield and also scoring the opening try. Yet the real star was the nippy scrumhalf Tate McDermott, who has made a very promising start to his Super Rugby career. The 20-year-old former sevens representative’s game-management was good and his attacking instincts red-hot.