The downward spiral for Swys de Bruin and his men continue as they subside in Canberra. 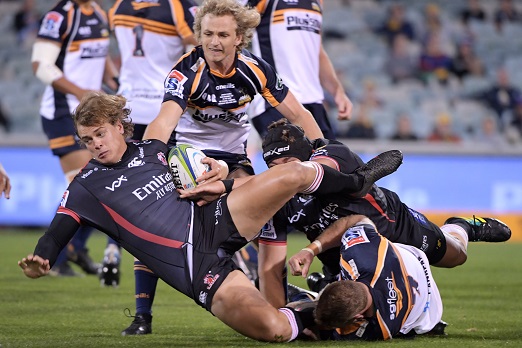 Andries Coetzee of the Lions is tackled during the Round 9 Canberra Brumbies and Lions Super Rugby match at GIO Stadium on April 13, 2019 in Canberra, Australia. (Photo by Tracey Nearmy/Getty Images)

Hammered by the Sharks last week, the Lions started their Super Rugby tour Down Under on a losing note, going down 31-20 to the Brumbies in Canberra on Saturday.

The Brumbies outscored the Lions by five tries to three, and while it was a much improved performance by the Lions, they still missed far too many tackles.

Leading 19-8 at the break, the Brumbies took advantage of 15 Lions missed tackles in the first half and 36 overall to prove the more coherent of the two sides.

After coughing up a yellow card in the fifth minute for a tip tackle on Lions hooker Malcolm Marx, the Brumbies centre Tom Wright was a tower of strength and caused the Lions numerous problems on defence. The manner in which he toyed with the Lions’ tackling to score his team’s fifth try in the 57th minute had class written all over it.