Johnny’s back doing an ambulance job for the Bulls 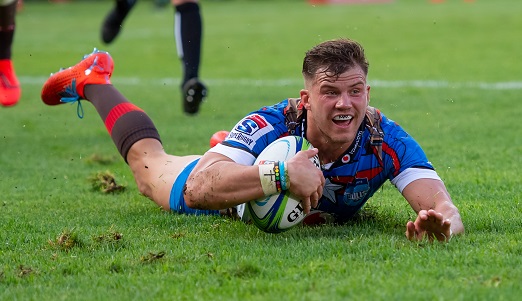 Johnny Kotze of the Vodacom Bulls scores a try during the Super Rugby match between Vodacom Bulls and DHL Stormers at Loftus Versfeld on February 16, 2019 in Pretoria, South Africa. (Photo by Anton Geyser/Gallo Images)

Ever since he made the trek from Newlands to Loftus, Johnny Kotze has been the guy who’s given the ambulance job.

When former coach John Mitchell had a shortage of wings, the 26-year-old would stand in with aplomb.

In fact, so well has Kotze adapted that he was considered one of the New Zealander’s success stories during his short tenure and could even be considered a specialist in the position nowadays.

But now his current head coach, Pote Human, has called him up for ambulance duty again … ironically back in the position where he first made his mark at the Stormers – centre.

With the influential Jesse Kriel now effectively sidelined for the rest of the Super Rugby campaign, Human on Wednesday ignored the claims of other specialists and chose to rather back Kotze for this weekend’s meeting with the Waratahs.

“This is the part of the season where depth is tested,” said the Bulls mentor.

“Jesse is a huge loss, everyone knows he’s a world-class player. He was in great form and the injury is a pity But it’s an opportunity for Johnny.

“Johnny is a great player and a big heart. The reason why I picked him is he has guts. That’s the most important thing I need in the No 13 position, especially against overseas teams.”

Speaking of underrated (and perhaps even underappreciated) players, former Tuks stalwart Andre Warner also finally gets an opportunity to stake a claim at scrumhalf.

However, that selection – at the expense of Bok No 9 Embrose Papier – is a double-edged sword.

“To be honest, I think Embrose is under a lot of pressure at the moment in terms of expectation from various quarters. I believe we need to just let him go and play a bit in the SuperSport Rugby Challenge, where he can enjoy himself and be more expressive.

“After next week’s game against the Crusaders we go on tour and we need Embrose to be confident and in form.”