Don’t just swat that fly, we need them

There are more than 100,000 species of flies, and understanding their impact and role on the planet is key to our wellbeing. Just the mention of a fly is nauseating because of its association with dirt and disease, but you might want to think twice before swatting that fly because you actually need it more than it needs you.

Flies are so important to humankind and nature that 2019 has been formally designated the International Year of the Fly, with the University of Pretoria boasting a special fly research unit, headed up by associate professor of entomology in the university’s department of zoology and entomology Christopher Weldon.

The unit, fittingly called the Flies of Economic Significance (Flies) Research Group, is dedicated to understanding the behaviour, ecology and physiology of flies and how they affect human activities.

There are more than 100,000 species of flies, and understanding their impact and role on the planet is key to our wellbeing, Weldon said.

According to Weldon, flies serve humankind and nature, mainly by providing valuable information.

He said blowflies, for example, were drawn to dead bodies and useful in forensic investigations. These flies speed up decomposition by feeding on the soft tissue of a dead body.

By knowing the life cycle of these insects, scientists could determine how long they had been present in the body and accurately predict how long the person had been dead. 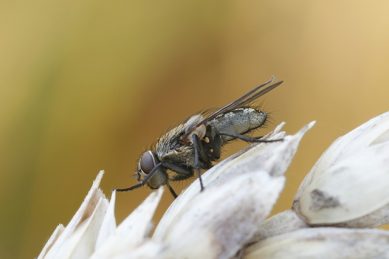 Weldon said flies were also used to determine the quality of freshwater systems.

“A variety of invertebrates are typically found in rivers, and the types of insects found in these waters act as a measure of its health.

“While aquatic flies lay their eggs in fresh water, they are also tolerant of poor-quality water. It is therefore safe to assume that water with fly larvae as the dominant invertebrate is heavily polluted with sewage,” Weldon said.

Certain flies are pollinators and play a key role in creating more plants. They serve as good biological control agents because their larvae eat aphids which would otherwise feed on plants.

Population growth has caused increased food consumption, meaning more waste, and Weldon says flies help to reduce the amount of waste that ends up in landfills.

He explained that blowflies and black soldier flies were naturally associated with decaying meat and manure, and bred en masse under factory conditions in bioconversion facilities to degrade waste.

“After the larvae [maggots] have fed on the waste, they are harvested and processed into animal feed, resulting in less waste and creating a circular economy,” Weldon said.

The rapid loss of insect populations has been described as the sixth great extinction. While entomologists are working to preserve species, it is key to know the value of insects such as flies.

As urbanisation increased and agricultural practises intensified, he said, flies were losing their natural habitat and were being killed off by insecticides. He said climate change was also affecting all species and causing a shift in the distribution of insects and hosts, leading to an increase in species extinction.

“Our research focuses on finding sustainable, environmentally friendly ways to control problem flies, reduce the use of insecticides and facilitate the beneficial use of flies.

“By using the basic biology of these insects, we can develop solutions that will benefit humans and amplify the benefits that flies are already providing, while finding ways to conserve them,” Weldon said.