The EFF leader has been very open about the close relationship he had with his grandmother. 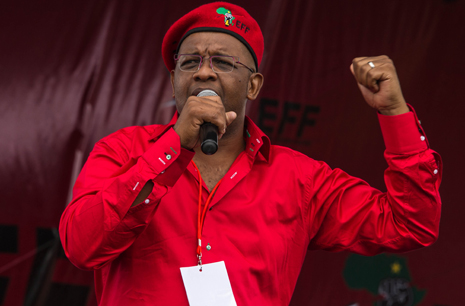 Economic freedom Fighters leader Julius Malema’s grandmother, who died at her home in Seshego in Polokwane, Limpopo on Saturday, had raised a leader in Malema, EFF chairman Dali Mpofu said.

Speaking at the Orlando Stadium in Soweto, Johannesburg during the EFF’s final May 8 elections rally on Sunday, Mpofu began by referring to the death of Koko Sarah and asked for a moment of silence.

“The entire EFF family was confused by this moment and we did not know what to do. We spent a few hours quietly with our president not knowing what to do. But he was the first one to say let us go inspect the stadium. That is the kind of soldier Koko Sarah raised,” Mpofu said.

Koko Sarah has been a pillar of strength for the Malemas, raising Julius from a young age when his mother Florah died following an epileptic fit. She was by Malema’s side when he was expelled from the African National Congress and when he formed the EFF, as well as when he graduated and when he got married.

“She decided to depart after door-to-door campaigns have been concluded. She left at the moment when even our haters say the only organisation and political party that is going to grow is the EFF. But the saddest part is that, as everyone knows, Julius Malema always goes to vote in Seshego with Koko. This Wednesday will be the first time he is only going alone,” Mpofu said.

Malema has been very open about the close relationship he had with his grandmother, how she instilled discipline in him and raised him to be an “honourable man”.

Malema arrived at 1.10pm to a rousing welcome in the packed stadium where he is going to deliver the party’s final election message.