The all-rounder replaces the unfortunate Anrich Nortje as worries over Kagiso Rabada and Dale Steyn persist. 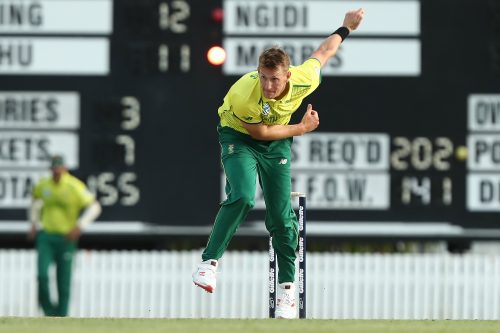 Chris Morris of South Africa bowls during the International Tour match between the CXI and South Africa at Allan Border Field on November 14, 2018 in Brisbane, Australia. (Photo by Chris Hyde/Getty Images)

The enigmatic but exciting Chris Morris has found a way into the Proteas’ World Cup via the backdoor.

Mohammed Moosajee, the national side’s manager and team doctor, on Tuesday confirmed that the all-rounder will be replacing Anrich Nortje for the tournament.

Nortje, who impressed in his debut series against Sri Lanka, had just recovered from a shoulder injury, only to sustain a hand injury during practice in Port Elizabeth on Monday.

Moosajee described the incident as “freakish”.

“The timing is really unfortunate as he’d just recovered. But knowing Anrich, he’ll be stronger despite this setback,” he said.

Kagiso Rabada and Dale Steyn remain concerns with back and shoulder injuries respectively, but are being managed carefully.