The agency says this makes social grants the second-most important source of income for households after salaries. 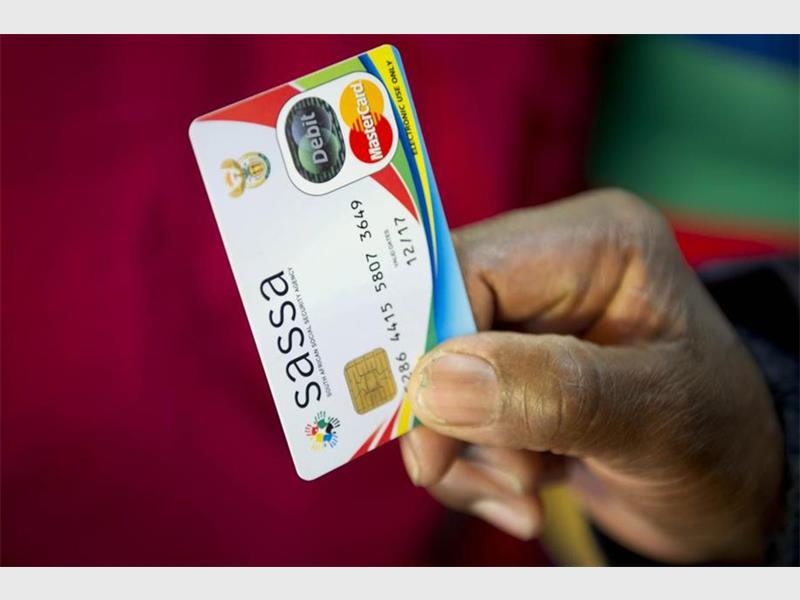 Stats SA further said grants are the main source of income for almost one-fifth (19.9%) of households across the country.

The statistics agency revealed this in its results of the General Household Survey (GHS) 2018 which the statistician-general of South Africa, Risenga Maluleka, released on Tuesday, May 28.

The report, amongst others, provides a sense of how far South Africa has progressed over the past 17 years. It outlines some achievements and challenges during this period and identifies breaches and disparities in the level of development in the country.

“The GHS aims to assess the levels of development in the country as well as the extent of service delivery and the quality of services in a number of key service sectors, including health, social security, housing, energy, access to and use of water and sanitation, environment, refuse removal, telecommunications, transport, household income, access to food and agriculture.”

Stats SA said the percentage of households and persons who benefitted from a social grant have increased since 2002. 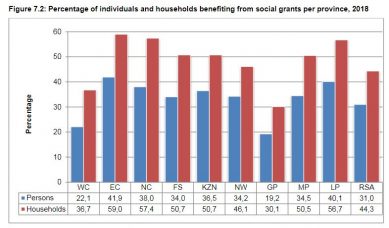 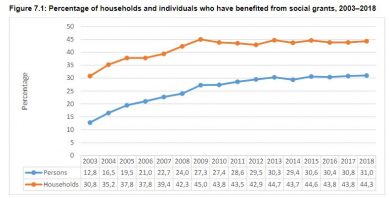 “More than one-third of black African individuals (33.9%) received a social grant, compared to 29.9% of coloured individuals, and 12.5% of Indian/Asian individuals. By comparison, only 7.5% of the white population received grants.” 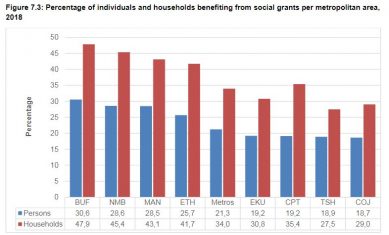 “Large differences are noted between cities. Nearly three-tenths of individuals in Buffalo City (30.6%) and Nelson Mandela Bay (28.6%) benefitted from social grants, compared to less than one-fifth in Ekurhuleni and city of Cape Town (both 19.2%), city of Tshwane (18.9%), and city of Johannesburg (18.7%).”

For households at a metropolitan level, the report showed that the reception of one or more social grants was most common for households in Buffalo City (47.9%) and Nelson Mandela Bay (45.4%) and least common in Tshwane (27.5%) and the city of Johannesburg (29%).