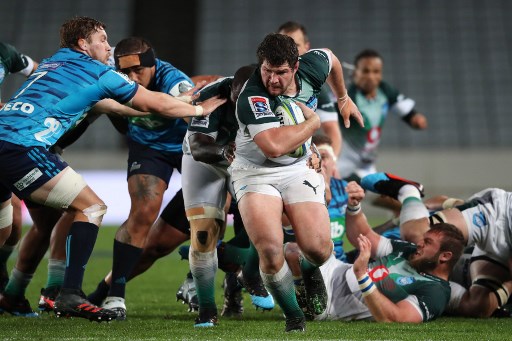 Bulls' Marco van Staden runs with the ball during the Super Rugby match between New Zealand's Auckland Blues and South Africa's Northern Bulls at Eden Park in Auckland on May 31, 2019. (Photo by MICHAEL BRADLEY / AFP)

When he’s bulldozing his way into collisions or making wholehearted tackles, Marco van Staden strikes one as the archetypal no-frills rugby player.

Yet looks, as always, can be deceiving.

The bustling Bulls flanker is not your average local rugger bugger and admits he’s not going to force his way back into Springbok reckoning if he’s just going to focus on doing the basics well.

ALSO READ: Super Rugby XV of the week: No Elton, no problem

That’s a lesson he’s taken to heart since making his international debut in 2018.

“It really isn’t just about keeping things simple,” said Van Staden from New Zealand on Tuesday, where the Bulls will conclude their Super Rugby tour against the Highlanders in Dunedin on Friday.

“The smaller, finer details really do count. Rugby is so competitive that it’s those intricate things that give you an edge over your opponents. You have to be able to do anything in your power to get ahead of the player that’s in front of you.”

It explains why Van Staden became such a key player under former Bulls mentor John Mitchell, a fellow rugby “geek” and the man who brought the 23-year-old into the limelight.

His exposure to the Green-and-Gold, however, has also taught him patience, especially since some iffy form and injuries have interrupted his progress.

Pote Human, his current franchise coach, though continues to show the utmost faith in him and consistently touts his Bok claims.

Van Staden has rewarded that with a gradual upturn in form, culminating in a superb all-round showing in last week’s draw with the Blues.

“I didn’t play to my standards at times in 2019. It’s taken a bit longer than I had hoped to find form again. But the Blues game has given me confidence,” he said.

“It’s the type of boost that inspires you to want to end on a massive high in the current campaign.”

“Of course a Springbok place is at the back of my head. I think it’s the case with every player,” he said.

“But I don’t want to make that an immediate focus. I can get there by focusing on what I can control – playing Super Rugby and playing consistently. I want to be at 100% again.”