Is this the last time we see Pollie against Elton?

Rassie Erasmus has embraced them as a combo at international level, but it's a different matter in Super Rugby. 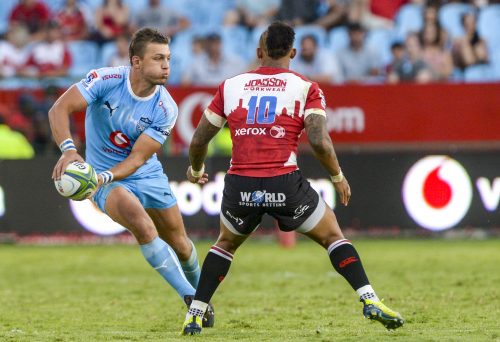 Captain Handre Pollard of the Bulls challenged by Elton Jantjies of the Lions during the Super Rugby match between Vodacom Bulls and Emirates Lions at Loftus Versfeld on March 03, 2018 in Pretoria, South Africa. (Photo by Sydney Seshibedi/Gallo Images/Getty Images)

Whether one denies it or not, local derbies in Super Rugby are invariably about duels.

And when the Bulls and Lions clash at Loftus on Saturday afternoon, the battle between Handre Pollard and Elton Jantjies will arguably be the spiciest.

The two Springbok flyhalves have shared the No 10 duties at international level for the past two years, Jantjies being preferred in 2017 before his younger counterpart usurped him last year.

What will render Saturday’s showdown even more of a spectacle is the fact that it’s probably the last time these two men will play against each other on South African shores.

Pollard is off to French giants Montpellier, while Jantjies’ future at Ellis Park is still uncertain.

“A battle like this always gets the juices flowing for some reason. It’s good competition. We both have a lot of respect for each other. We’re different players, but any occasion you’re playing against a player who’s competing in the same Bok position as you is a big one.”

Lions coach Swys de Bruin though seemingly put a spanner in the works by picking Jantjies at inside centre for the game, which technically means the two playmakers won’t be direct opponents. However, the fluidity of the Lions’ attacking system means that it’s highly likely Jantjies will slot in at flyhalf at various stages of the game.

“The way we play the game means that No 10 and 12 switch roles constantly,” said De Bruin.

“Elton will have No 12 on his back, but he’s going to be fulfilling a lot of duties at flyhalf. To be honest, I don’t see this as a duel.”

Instead, De Bruin hopes the game will showcase again why these two men are viable options for Springbok coach Rassie Erasmus to use as a potential 10-12 combination at the World Cup later this year, something that was experimented with last season.

“I worked with the two last year at the Boks. They are two top players and it’s always interesting to see how they go. The Boks won both their World Cups with flyhalves at 10 and 12.”