‘I would stand up for him and wipe his tears’ – friends, family remember Ferndale High pupil

The Grade 10 pupil died on Tuesday when he fell from a third floor balcony at the school, after suffering an epileptic seizure. 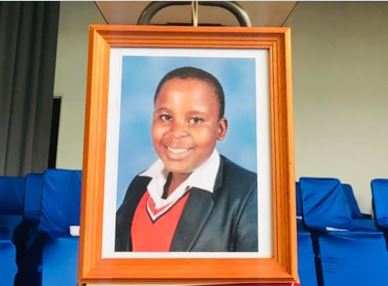 “I have lost a brother, friend and high school mate.”

He was speaking on Thursday at a memorial service for Molopyane at Ferndale High school in Randburg.

The Grade 10 pupil died on Tuesday when he fell from a third floor balcony at the school, after suffering an epileptic seizure.

Thamane said he and Molopyane had started Grade 8 together in 2018.

“We used to play together with the robots. Last year, he approached and confided in me that he has [epileptic] seizure conditions. He asked me to be his friend because he was lonely. I used to carry his bag whenever he was not feeling well.

“When other pupils were laughing at him, I would stand up for him and wipe his tears. He used to buy me food at the tuck-shop,” Thamane said.

The two pupils shared many memories together.

“The last time I saw him was on Tuesday. We were playing and he wanted to hit me with a belt. Unfortunately, he was taken away from us.

“He was a nice person who used to help me with mathematics, and I would teach him technology. We were like brothers. We laughed and cried together. I have lost a brother, friend and high school mate,” said Thamane.

Molopyane’s teacher Vusi Malevu said: “Molopyane means I am grateful or thankful. It is surprising how people always follow their names. He lived his life with an amazing sense of gratitude.

“I was fortunate to be his class teacher. He was an extraordinary person, full of life, hope and spirit to the very end, despite his illness. He had a smile that will shine up the room.

“We mourn the passing of a true Ferndalian. He was a wonderful pupil and classmate. To me he was my son. In the midst of sorrow, we celebrate a boy who had wisdom and insight way past his age. He would hold and interact in a mature conversation that would surprise anyone.”

Molopyane would often miss school because of his medical condition.

“He had hope in his eyes and passion for everything he did. He worked harder than most and achieved incredible marks. He loved technology, maths, physics and engineering.

“He also loved robots, arts and soccer. He had multiple talents. I hoped to see him grow into a great soul and see him accomplish greatness. He was short, black dynamite who changed all our lives. He loved fine things in life. His hunger for success was matched by his love for food. He loved his food.

“He often felt lonely when people battled to understand his illness, as he spent his lunch time in my classroom. I was fond of him. He leaves a vacuum in my heart that I can’t fill. We saw how he suffered and now we must allow him to rest in peace,” Malevu said.

14 pupils have died in Gauteng so far since the new term got under way.

Education MEC Panyaza Lesufi said hardly 24 hours after visiting the school on Wednesday, he had received a call that another pupil had died after being hit by a vehicle driven by a teacher.

He pleaded for divine intervention to end the deaths of pupils in the province.

” We said to our creator that if you are sending a message to us, we have accepted it. We plead with you God that he must be the last person.

“I wish I had answers. I wish I can respond to all those who bringing those messages to us. I wish I can plead… that it is enough. If this was a game, let be it over,” he said.

Lesufi said he had run out of words to comfort those who had lost a child.

“We can’t find ourselves teaching our children how to write an obituary, rather than write a poem. I am confronted with a difficult task to look in the eyes of Molopyane’s parents and say, I am sorry.”

Lesufi pleaded with all pupils in Gauteng to refrain from attacking and bullying other pupils, and learn to love those who suffer from various medical conditions.

Molopyane will be buried on Sunday in Hebron.