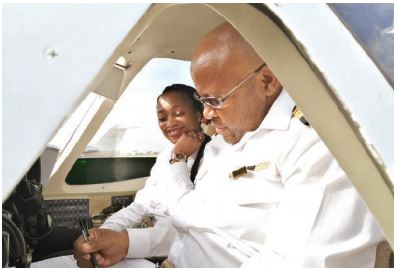 Transport Minister Fikile Mbalula has directed that an independent inquiry be undertaken into a plane crash that claimed the lives of three employees of the South African Civil Aviation Authority’s (Sacaa) flight inspection unit.

He announced this development on Monday following the release of a preliminary report by the Accident and Incident Investigations Division (AIID).

Mbalula said the independent inquiry was appropriate, considering the aircraft belonged to the Sacaa.

Captain Thabiso Tolo, Flight Inspector Gugu Mnguni and First Officer Tebogo Lekalakala were on board during a calibration mission that took off from George airport and crashed into mountainous terrain near Mossel Bay on January 23, 2020.

At their memorial service, Lekalakala’s husband, Sputla Lekalakala, called on the government to set up an independent panel to investigate compliance within the flight inspection unit.

Mbalula had attended the service.

On Monday, he welcomed the report and said it was imperative the investigation be concluded as soon as possible to give the families closure.

“I have equally noted that the AIID, in conducting this investigation, has taken reasonable measures to ensure independence and objectivity. This includes the appointment of an independent expert, a former managing director of the US’ National Transportation Safety Board,” Mbalula said.

“I am equally mindful of the concerns raised by the families on the potential conflict of interest on the part of the South African Civil Aviation Authority due to the fact that the aircraft in question belonged to the Sacaa and the personnel who manned the flight were Sacaa employees.”

Mbalula said the preliminary investigation was in line with the requirements of the International Civil Aviation Organisation (ICAO).

“In the coming weeks, arrangements to appoint an independent authority to take the investigation to its logical conclusion will be expedited in line with the ICAO prescripts, and details thereof will be made public.

“We are committed to ensuring that this investigation is finalised as quickly as possible.”