According to the Brazil's National Institute for Space Research, 10,129 square kilometres of forest was destroyed between 2018 and 2019 - 3.76% higher than previously reported. 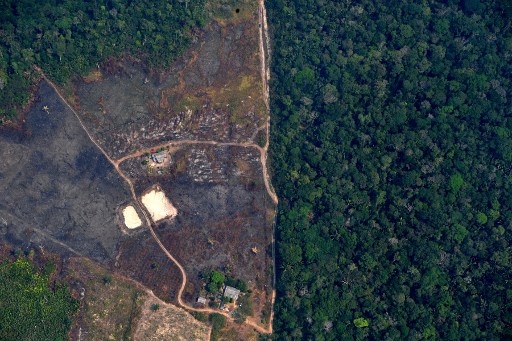 (FILES) This file photo taken on August 23, 2019 shows an aerial view of a deforested piece of land in the Amazon rainforest near an area affected by fires, about 65 km from Porto Velho, in the state of Rondonia, in northern Brazil - Deforestation in the Brazilian Amazon continued to increase last month, according to official figures that recorded the worst month of May since measurements began in 2015. (Photo by Carl DE SOUZA / AFP)

The Brazilian Amazon’s continued trend of deforestation has resulted in a revision of statistics released last year.

According to Brazil’s National Institute for Space Research (INPE), data released last year, which clocked deforestation rates between August 2018 and July 2019 at 9,762 square kilometres, has recently been revised to indicate an even more significant figure.

This increase was calculated by analysing hundreds of images of states that make up the Brazilian Legal Amazon (ALB). The states of Pará, Mato Grosso, Amazonas and Rondônia contributed to over 80% of deforestation in the ALB.

The region was ravaged by forest fires last year, with 78,383 fires recorded last year, the highest since 2013. Over half of these fires occurred in the Amazon, home to about 20 million people, and countless unique species.

And with Brazil entering its dry season, which is when the bulk of deforestation activities and fires take place, deforestation rates are likely to increase even more by 2021.

Issues for the region have been compounded due to the worldwide Covid-19 pandemic, with deforestation now taking a back seat.

Between January and April this year alone, over 1,200 square kilometres was destroyed, 55% higher than last year.

Conservationists are skeptical that President Jair Bolsonaro will be able to put a stop to the ever-increasing rates of deforestation.

Bolsonaro openly advocated for land in the Amazon to be cleared for agricultural and mining, and came under fire last year for blaming the blazes on non-governmental organisations after their funding was cut.

Climate change also threatens to push one of the world’s most biodiverse places on the planet to the brink of disaster.

One year on, and still no justice for murdered KZN environmental activist
1 hour ago
1 hour ago

One year on, and still no justice for murdered KZN environmental activist
1 hour ago
1 hour ago