Vulture numbers are dwindling fast in southern Africa, and a world without vultures means a disease-ridden, foul-smelling planet, as these creatures are vital to preventing disease outbreaks. Faced with a global pandemic that likely has a zoonotic source, the world owes nature’s cleaning crew responsible for preventing disease outbreaks a round of applause.

This international vulture awareness day, Wildlife ACT species director Chris Kelly has challenged the country to reflect on the essential role vultures play in an ecosystem, but also to take action against growing threats facing our much-needed winged friends. Vultures are misunderstood. They may not be as easy on the eyes as other bird species, but they play a fascinating and important role in helping prevent disease outbreaks.

This is because they pick decaying carcasses clean, and sometimes travel far distances to do just this.

Kelly said that a world without vultures “would be a foul-smelling place, filled with disease and carcasses across our landscape”.

They are the kind of animals that you do not appreciate until they are no longer around, because they ensure the health and functioning of ecosystems.

And they can eat virtually anything – their digestive systems contain special acids able to dissolve anthrax, botulism and even cholera bacteria. If a carcass rots too extensively, wild and feral scavenging carnivores feasting without the presence of vultures risk spreading harmful disease as well, such as rabies.

But despite their perceived invincibility, there are some things they cannot swallow, namely medicinal drugs used to treat livestock, and lead-based ammunition.

Kelly explained that vultures across southern Africa are still at risk of being poached for muthi, and said some superstitions see vultures as being “harbingers of death”, or a threat to livestock.

When a vulture feeds on a carcass that has been shot with lead-based ammunition, tiny fragments are ingested that is fatal to their nervous and reproductive systems. Within two to three weeks, vultures suffering from lead poisoning will be unable to fly or breathe, and will eventually starve to death. 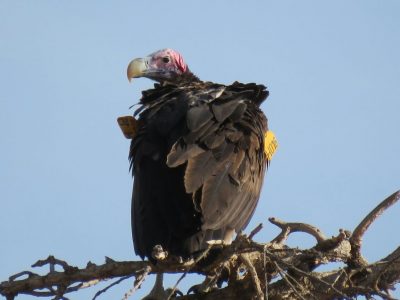 “These critically endangered birds provide an incredible ‘clean-up service’ for the environment.

“Identifying carcasses from kilometres away, vultures swiftly move in and can finish a carcass in a matter of minutes. By vultures removing decomposing animals from the landscape, humans are ensured a clean environment free of carcass-borne diseases,” Roberts explained. Despite their usefulness, the odds are not in the vultures’ favour, with many species now only being able to breed in protected nature reserves. Vulture sightings are also dwindling fast.

Of the five Savannah species of vultures found in South Africa, all are either classified as endangered or critically endangered, with current trends indicating that species sub-populations, the White-Headed Vultures and Lappet-Faced Vultures, could be extinct within a few years.

But there is a glimmer of hope. 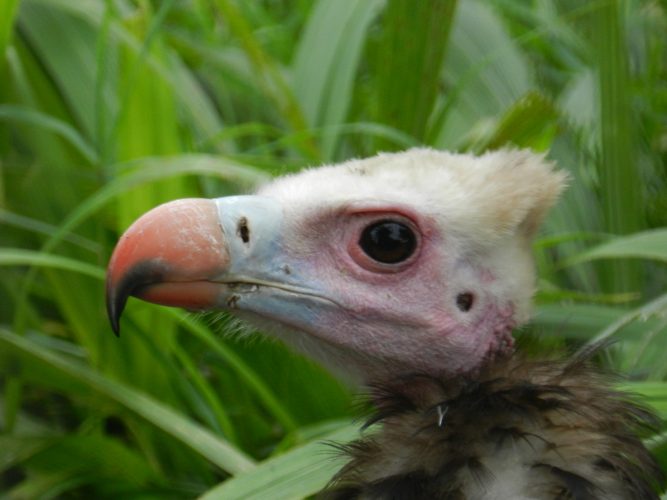 The face of a White-Headed Vulture. Photo: Project Vulture

Thanks to Wildlife ACT partnering with stakeholders such as Ezemvelo KwaZulu-Natal Wildlife, the Endangered Wildlife Trust, BirdLife South Africa and the Department of Environment, Forestry and Fisheries, work is being done to help save South Africa’s vultures.

Interventions include using tracking technologies to identify “vulture hotspots” to focus attention on conservation and mitigation measures, and carrying out annual nest surveys to monitor the breeding success of nesting pair abundance.

Vultures take up to seven years to reach maturity, and only lay one egg a year. It would take two vultures two years to pair up during breeding season just to replace themselves and sustain population numbers, Kelly explained. 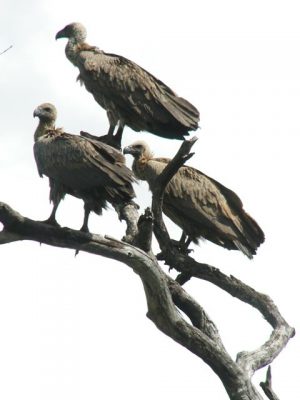 Work is also being done within the hunting industry to try and phase out lead-based firearm ammunition.

Wildlife ACT and its partners have thus far fitted more than 65 vultures with GPS trackers, tagged and sampled over 150 vultures, conducted 36 nest surveys, and released 14 recovered vultures back into the wild.

“We… need to help with changing perceptions around certain wildlife species. Like sharks and hyaenas, vultures are often stereotyped as the ‘bad guys’.

“But despite what humankind thinks of them, we need to acknowledge their importance and take a holistic approach in protecting vultures. To do this successfully, we need to take a collective stand to spread awareness, raise funds and report sightings to help protect these unique birds,” Kelly emphasised.

What to do if you find or spot a vulture

If you spot a tagged vulture, click on this link to report it. Record the identification number and species, if possible, along with the location you found or saw it in, and take a photo of the bird with the ID tag, if you can.

You can also help SA’s vultures by raising awareness or donating money, to help purchase essential equipment to continue keeping vultures out of harm’s way.