In one incident that became physical, tensions ran high in Northwold when a group of residents targeted their anger towards a house where the festival was being celebrated. 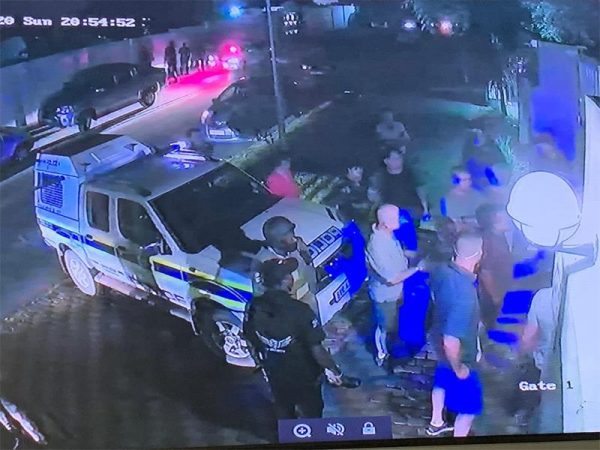 Video footage captured on CCTV of the police responding to the group of Northwold residents outside of a house where Diwali was being celebrated. Photo: Supplied

Tensions ran high in Northwold, Randburg, after residents complained about the use of fireworks for Diwali celebrations this past weekend.

On 14 November, followers of the Hindu faith celebrated the yearly festival of the triumph of light over darkness, known as Diwali, as one of the most important dates in their religion.

The festival involves five days of cultural activities that include wearing fabulous clothing, eating traditional food, worshipping at temples and celebrating light with lanterns and fireworks.

Many non-Hindu residents took to social media groups to voice their concerns over the use of fireworks.

In other instances, residents voiced their disdain over the entire religious festival altogether.

In one incident that became physical, tensions ran high in Northwold when a group of residents targeted their anger towards a house where the festival was being celebrated.

“We were celebrating Diwali over the weekend, and this year we decided to celebrate at home, firing off a small number of fireworks. The next thing we knew is our entire road was full of cars,” said resident Devi Royappen.

In captured CCTV footage, a group of angry neighbourhood residents smashed and attempted to lift the gates of the family’s home.

“They were threatening us, and we alerted our security. When security arrived, the mob harassed them. The group threw large rocks, damaging our windows, and banged on our gates aggressively and tried to lift it. We could not even leave our front door as we were terrified, especially the little ones,” continued Royappen.

Police eventually arrived on the scene to calm the situation down and informed the mob that the use of fireworks up until 10pm on Diwali was legal.

“I cannot believe the way these people behaved. It was complete disrespect for someone else’s culture,” she said.

Royappen and her family have lived in the area for over 14 years, and she said that up until now, there has never been a problem.

“People make the mistake of thinking that we don’t care about animals when this is completely untrue. We have animals of our own and we make provisions for them and their safety. This happens once a year, and just like when others will celebrate New Year festivities, we prepare for it.”

Metro Police spokesperson Wayne Minnaar said that while the public needs to understand that there are rules and regulations they need to abide by when using fireworks. Fireworks for use in the festival were permitted from 7pm to 10pm on the day.

With more fireworks expected over the coming New Year period and specific times sanctioned for their use, the Metro police have appealed to merrymakers to use fireworks safely and to keep the safety of children and pets in mind at all times.

Captain Balan Muthan, spokesperson for Honeydew Police Station, confirmed that police were called to defuse the situation and that no charges had been laid.

This article was republished from Randburg Sun with permission