Oscar shows no emotion as judge finds him guilty 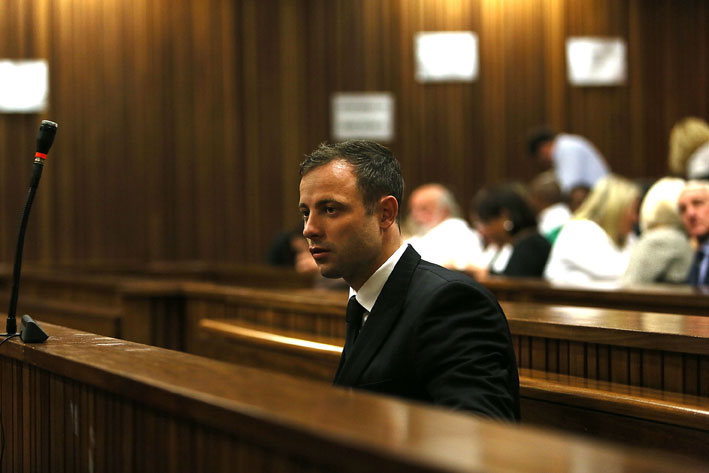 Paralympian Oscar Pistorius arrives at the High Court in Pretoria on Friday, 12 September 2014 where judgment in his trial will continue. Pistorius has been acquitted of murdering his girlfriend Reeva Steenkamp."The accused therefore cannot be found guilty of murder dolus eventualis [legal intent]... that however is not the end of the matter as culpable homicide is a competent verdict," said Judge Thokozile Masipa on Thursday.The State has not proved beyond reasonable doubt that the accused is guilty of premeditated murder. Picture: Alon Skuy/Times Media Group/Pool

Reeva’s parents, June and Barry Steenkamp, did not show much emotion either where they sat in the second row of the court behind Pistorius’ family.

Pistorius’ brother Carl, who was in court in a wheelchair with both feet in casts on Tuesday for the first day of the judgment, was not present in court today.

She acquitted him on charges of unlawfully firing his 9mm pistol through the open sunroof of a car and the unlawful possession of .38 ammunition.

The Judge said the state had not proved either of the charges beyond reasonable doubt.

Pistorius denied the sunroof incident and claimed the ammunition belonged to his father Henke and he had no intention to possess it unlawfully.

Recapping her findings, Judge Masipa said the circumstantial evidence on the murder charge had been weak and the evidence of witnesses about what they had heard that fateful night proved to be unreliable and unimpressive.

“The onus to prove the accused’s guilt beyond reasonable doubt rests with the state throughout. His version was that he had fired the shots at the toilet door thinking there was an intruder.

“The sequence of events – the shots, screams, shouts for help and the cricket bat striking the door; the calls made by various witnesses to security to report screams or shots are more in line with the version of the accused.

“Although it is not necessary for the state to prove motive, there’s no basis on which the court could make inferences about why he (Pistorius) would want to kill the deceased (Reeva),” she said.

The Judge said there was also objective evidence in the form of phone records which supported Pistorius’ version.

She said his conduct shortly after the incident was inconsistent with the conduct of someone with intention to commit murder.

He shouted for help and called a friend for help, called 911 and security and sought to get help for Reeva as soon as possible. He prayed to God to save her life, was seen trying to resuscitate her, pleaded with a neighbour to help save her and was very distraught.

“It cannot be said that he did not entertain the genuine belief that there was an intruder in the toilet who posed a threat to him. He cannot be found guilty of murder with dolus directus.

“The court found that he could not be found guilty of dolus eventualis either. It could not be said that he foresaw that either the deceased or anyone else for that matter might be killed when he fired the shots at door,” the Judge said.

However, Judge Masipa said the material before court showed Pistorius had acted negligenbtly when he fired the shots into toilet door, knowing someone was behind it and there was very little room to move.

“The reasonable person with a similar disability would have fofreseen the possibility that whoever was behind the door might be killed by the shots and would have taken steps to avoid the consequences. The accused failed to take such steps,” she added.