The fast bowler was in good form in Rawalpindi, picking up five wickets, but so far he hasn't been backed up by the top-order, with the team crumbling to 106 for four at stumps. 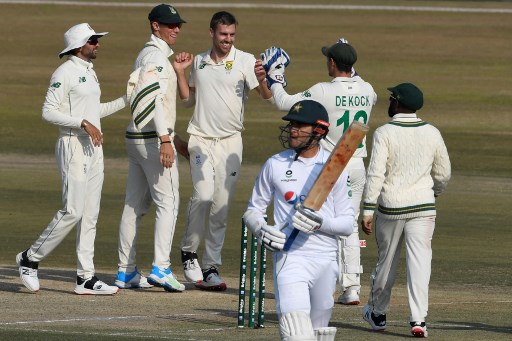 South Africa's Anrich Nortje (third from left) celebrates after the dismissal of Pakistan's Shaheen Shah Afridi (front) during the second day of the second Test in Rawalpindi on Friday. Nortje picked up five wickets in the innings. Picture: AFP

Proteas fast bowler Anrich Nortje hails from Uitenhage, the centre of automotive industria in the Eastern Cape and if there were two characteristics to his superb bowling on the second day of the second Test against Pakistan in Rawalpindi on Friday, they were that he certainly had wheels and how industrious he was in delivering 24-and-a-half overs and taking five for 56.

Nortje cranked up the pace on Friday, but his aggression was wonderfully controlled as he spearheaded a fine day in the field for South Africa as they took Pakistan’s last seven wickets for just 127 runs to bowl them out for 272.

It was a great shame that South Africa’s top-order batsmen couldn’t show the same controlled aggression as they slumped to 106 for four at stumps.

After close of play though, Nortje bore the satisfied demeanour of a man who knew he had put in a proper shift of work, and was confident his batting colleagues could do the same on the third day on Saturday.

“I think we restricted them to a good total and it is definitely manageable for us to exceed that, hopefully we can have a good, long bat tomorrow and the guys can build some partnerships. The major thing when bowling was to have controlled aggression and the right lines and lengths. It was really good bowling by all the bowlers, the energy we bring and lines and lengths are things we can control,” Nortje said.

“We didn’t bowl long spells, but we just tried to hit the wicket and dig it in as much as possible. I just tried to bring as much energy as I could when I came on. And the work I’ve done on my lines and control has definitely helped.”

Most fast bowlers dread coming to the subcontinent with its slow, flat and low-bouncing pitches, but Nortje said he was able to make the most of whatever assistance he could find as he notched his third five-wicket haul, and his first away from home, in his 10th Test.

“There was a bit more bounce out there than there was in the last Test, and trying to utilise whatever you get is important. Otherwise I was just trying to be as tight as possible and not give any width,” he said.

“When the ball was a bit harder I saw the opportunity to get the ball through a bit more, there was more bounce with the harder ball. There’s not a lot in it for the seamers so it’s important to utilise what is in your favour.

“One or two balls stayed low as well so maybe inconsistent bounce will come more into play, so the pace bowlers are not completely out of it, you just have to employ different methods than at home.

“I played my first Test in India and, looking back, I’m quite happy about that because conditions were not easy and I learnt a lot. It means a lot to me to get a performance like this in the subcontinent,” Nortje said.

Afghanistan keen to host Pakistan in ODI series
4 days ago
4 days ago
PREMIUM!

Afghanistan keen to host Pakistan in ODI series
4 days ago
4 days ago
PREMIUM!